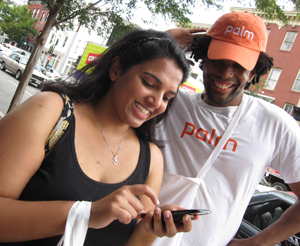 The brand ambassadors, clad in Palm gear, are executing a text-to-win campaign that is awarding 10 Palm Pre Plus smartphones daily and allows consumers to touch and feel the phones and familiarize themselves with its operating system. The ambassadors also are distributing “Palm Balm” lip balms and Palm t-shirts and rewarding current Palm users with phone accessories.

The tour launched in New York City, then traveled to Philadelphia and Washington, D.C. Additional stops include Chicago, Madison, WI, Minneapolis, the Jersey shore and Providence, RI, before it wraps on July 4 weekend in Boston. The tour spends an average of three days in each market hitting two-to-three locations daily such as New York City’s Times Square, Bryant Park and 34th Street at Broadway, sites generally located near Verizon Wireless stores. Verizon is Palm’s largest partner.

Fans can follow the tour’s progress and view photos from each market on Palm’s Facebook page. Brand ambassadors also are tweeting about the tour as it moves from city to city.

“Besides outdoor ads and TV advertising, this is another reinforcement of the Palm brand,” David Liddle, director-consumer experience at Palm, told Buzz. “We’re trying to build as much awareness out there as we can. People have seen the resurgence of Palm over the past year and are interested in what is going on.” Agency: The Michael Alan Group, New York City.