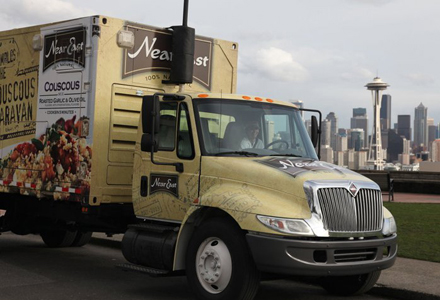 Near East Brings Couscous to Seattle

The Couscous Caravan is on the street in Seattle, spreading the good word about its tasty side dish until May 15. This is the Near East brand’s first foray into food trucks and the vehicle will be visiting retailers, weekend events and downtown locations to serve up free couscous samples, recipes and coupons all the while building buzz and excitement via the brand’s Facebook page at facebook.com/neareastdish and on Twitter @NearEastDish.

The campaign has an altruistic side, too. Via its social media channels, Near East is working to fight hunger across the state of Washington. Through the end of the campaign, the brand is inviting Seattleites to tweet the hashtag #CouscousCaravan and for every tweet to @NearEastDish with #CouscousCaravan in the message, Near East will donate a box of couscous to Northwest Harvest, a Washington-based hunger relief agency. The goal is to donate 10,000 boxes, so they need that many tweets. In addition, if followers post a photo of the Caravan with the tweet, the brand will double the donation to two boxes of couscous.

“Near East is a strong brand, but it has low brand awareness. We find that when people try the product they really become loyal consumers,” E.G. Fishburne, senior brand manager at Near East, told Buzz. “This gets the product into their mouths and that pulls them into the brand.”