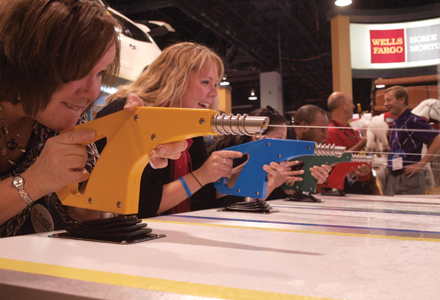 Is Your Trade Show Booth Fun?

How to bring your brand message to life at a trade show? Let us count the ways. There’s signage and graphics, high-tech experiences and theatre presentations, press events and cocktail parties, to name a few. But trade shows can also be a forum to release a brand’s more creative side. Like Lenovo did this year at CES when it hired Hollywood stuntmen to ride through Las Vegas on top of taxis and limos. Or Wells Fargo Home Mortgage, which turned rubber duckies and conga lines into business-generating engagement tools. Here’s a closer look at two recent trade show programs that ranked high on the fun factor without losing sight of serious goals.

Lenovo’s Dd Devils At CES 2012
Computer brand Lenovo literally brought its global branding campaign and tagline, “For Those Who Do,” to life at CES. The campaign, which launched in 2011 and is slated to run for two years, positions Lenovo products as “do machines” for active people on the quest to discover and build what’s next. To make that point at CES, it placed five of the jumpsuit-clad DO devil characters who star in its TV ads on top of three taxis and two limos (one DO devil per vehicle) that drove around Las Vegas Boulevard and the convention center area. The company also brokered a deal with MGM casino properties to bring the cabs and limos to its taxi pick-up lines, parking lots and entryways. Just like in the ads, for four days these living taxi-toppers, who are actually trained Hollywood stuntmen, used their Lenovo IdeaPad U300s Ultrabooks to check emails and work on Word documents. They also hopped off from time to time to shake hands and high-five passersby (The Woo Agency, Los Angeles, handled).

A “Spot the DO Devil” contest extended the promotion online. CES attendees and others who snapped a DO Devil and tweeted it to @Lenovo with the hashtag #SpotTheDoDevil, were entered to win prizes from Lenovo and MGM.

The theme carried over to handling agency, The Woo Agency, as well. Lenovo challenged the company to shoot a TV spot showing the DO Devils on the cabs, and have it cut and edited and ready for approval the next morning. The spot played throughout the show on screens in the Lenovo booth.

“At CES 2012, we creatively used our Lenovo DO Devils as human taxi-toppers to capitalize on the Las Vegas Convention Center’s lengthy traffic lines and break through the sensory overload in a crowded city that’s seen it all,” says Matt Bereda, director of Lenovo’s worldwide SMB product launch. “Convention-goers stopped in their tracks, grabbed photos and waved as our Lenovo-branded vehicles cruised down the Vegas strip.”

Nearly 40,000 people saw the DO Devils in Vegas, and Lenovo generated nearly 400,000 contacts through social media. “We literally brought the Lenovo ‘For Those Who Do’ campaign to life,” Bereda says.

Rubber Duckie, You’re The One…
At NAR, the National Association of Realtors’ Conference and Expo held last November in Anaheim, Wells Fargo Home Mortgage wanted to get across the idea that it is a “Single Source” lender, meaning it provides realtors with all the resources they need to build their businesses, approve buyers and close deals.

“It would have been easy for us to show a picture of a house or a stage coach, but that is always out there. It is a sameness or a norm,” says Kathleen Gunderson, events program manager at Wells Fargo. Instead, she created an integrated program based on her own personal marketing philosophy, which is built on three “Rs”: a message must be “repetitive, resounding and re-memorable.”

So she developed a message around the theme that Wells Fargo can help “Get Your Ducks in a Row.” It incorporated the playful rubber ducky icon into activities and promotions that appealed to the fun-loving but competitive realtors who attended Wells Fargo’s 50-foot by 50-foot booth (Live Marketing, Chicago, handled).

The message began at the eight registration desks that Gunderson placed along the outside of the booth. Once attendees signed in and took a short survey that served as a lead retrieval form, they received a gold coin, the first of three tokens they needed to qualify to play “Lucky Duck,” a water-gun game similar to those found at arcades, and win a Wells Fargo stuffed pony. They also received a free book, “Takin’ Care of Business,” by Brian Buffini and Joe Niego.

Once inside, attendees played “Rubber Ducky Derby,” a game on one of 21 iPads in which they answered questions and received information about Wells Fargo loans and home renovation financing to collect a silver token. The iPads were tethered around a large structure inside the booth.

Next, they earned a copper token by playing the “Get Your Ducks in a Row Show,” a game-show style event that involved 36 people at three gathering stations who competed via an audience response system for $20 Wells Fargo Visa gift cards while WFHM messaging was delivered by a professional presenter.

The fun went outside of the booth as well, with the 16,000 Mardi Gras beads with yellow rubber ducks that were distributed, along with a form to enter a giveaway for a 2012 GMC Acadia Denali, in NAR registration bags. A “Bead Brigade” team who spotted attendees wearing the beads inside and outside of the convention center rewarded them with $10 restaurant gift cards and a second chance entry to win the car, which was featured in the WFHM booth. A second car was located outside the conference registration area.

But it didn’t stop there. Wells Fargo sponsored the shuttle buses, which sported “Get Your Ducks in a Row” messaging. A “dancing duck” at bus drop-offs encouraged attendees to join a conga line and passed out more beads. Those who did received a free t-shirt. The company also had attendees stick 3D rubber duck stickers to a 400-square-foot Realtor’s Relief Wall outside of general session rooms. For every sticker posted, WFHM made a $5 donation to provide housing-related assistance to realtors in areas affected by natural disasters.

It was quite ducky, for sure.