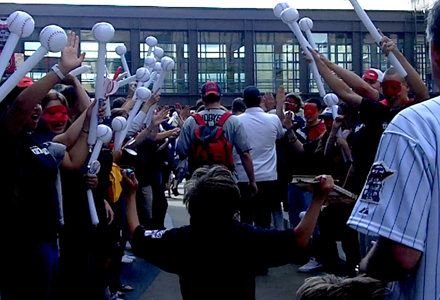 To generate content for its Facebook page and give consumers a reason to go visit it, candy brand Mentos (a.k.a. The Freshmaker) set loose a street team on the streets of Minneapolis for four weeks (June 7 to July 9) this summer. Dubbed the Mentos Instigators or Super Fans, depending on the event, the team of four wore branded t-shirts or other fun outfits, including superhero costumes when acting as Super Fans at Minnesota Twins baseball games.

“We didn’t put up some giant poster or plastic banner or place Mentos logos from head to toe; it was subtle,” Craig Cuchra, Mentos brand manager, told Buzz. “You weren’t quite sure if they (the team) was being paid or not or if it was just fun people doing stuff with Mentos.”

At the Twins games the Mentos Super Fans recruited an additional 25 consumers off the streets or on Facebook to be their Sidekicks and also wear Mentos superhero costumes while sitting in the stands, cheering and passing out samples. Though samples were always available, the objective was more than sampling; it was infiltrating people’s lives to make Mentos a part of their day. The instigators, for example, bought people lunch or asked fun questions for a chance to win branded t-shirts. The instigators also went to recreational areas (such as parks and watering holes) and used crazy stunts like blowing up geysers by dropping Mentos into Coke Zero bottles to break the ice and get people to talk to each other while enjoying Mentos candy. The experiences were all captured on video, which were uploaded onto Facebook.

The Minneapolis trial was a success and the brand is tweaking the program for a possible national roll out next year. Agency: Innova Marketing, Minneapolis.