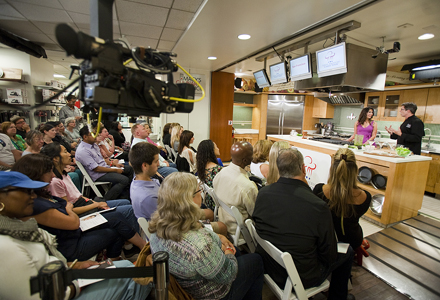 Macy’s on May 30 launched a 15-city road trip that has chefs from its Culinary Council performing cooking demonstrations and food tastings and features local culinary talent at each stop. After it concludes in mid-July, “Macy’s Great American Chefs Tour” will air as a 26-episode weekly series on public tv stations beginning in September.

Macy’s Great American Chefs Tour events take place at Macy’s stores, culinary schools and other venues. After its launch in Seattle on May 30 to 31, it has traveled to San Francisco (June 2), Las Vegas (June 7) and San Diego (June 10). The south and east coast legs of the tour will continue through June and into mid-July. At each stop, the Council and local talents focus on farm-to-table cooking. The chefs share details about their favorite local ingredients, teach the audience recipes and dish out samples. For social media, the tour has a dedicated hashtag, #macysgact.

Each episode in the tv series will focus on the farm-to-table philosophy, presenting a different city from the tour and offering an insider perspective as the chefs select ingredients from local farmers markets or directly from their suppliers. Viewers will then watch as the chefs lead the cooking demos and teach the audience how to pick, prepare and serve each dish. Celebrity chef and author Devin Alexander will host the series.

“Macy’s Great American Chefs Tour allows us an added opportunity to share the expertise of our Culinary Council chefs with customers in communities across the country,” says Amy Kule, group vice president national events and partnership marketing for Macy’s Parade and Entertainment Group. “As ambassadors of our brand, the chefs aim to teach customers how to shop, cook and eat at home, and these culinary tours bring that advice straight to our customers.”