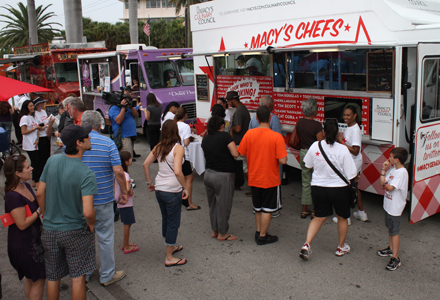 Macy’s Cooks Up a Culinary Tour

Macy’s is taking its Culinary Council on the road. The retailer, perhaps best-known for its Thanksgiving Day Parade as well as fashion and flower shows, has launched Macy’s Chefs A-Go-Go, a national food truck tour to drive awareness of its roster of chefs, teach consumers how to cook and shop like a master chef and to serve up free samples of their signature dishes.

The tour, which kicked off in Miami on June 28 at the Biscayne Triangle Truck Round-Up, continues through late summer. So far, it has stopped at Boston’s Prudential Center, Macy’s 4th of July Fireworks festivities in New York City, New York City’s Union Square and Harlem Week, and Washington, D.C’s Eastern Market. It will also travel to Chicago, Los Angeles, Portland, San Francisco and Seattle.

Many of the Culinary Council’s chefs, including Todd English and Marcus Samuelsson, will participate in the tour. KitchenAid is providing appliances for summer-inspired dishes such as hamburgers. At every stop, along with a signature chef dish such as Michelle Bernstein’s mojo guacamole, visitors will receive Emeril Lagasse’s “Babamas Foster,” chocolate-covered banana ice cream pops. The food is free, but attendees are encouraged to donate to hunger relief organization Feeding America. Fans who “like” Macy’s on Facebook or follow the retailer on Twitter receive a gift at each food truck stop. They can also follow the chefs on Twitter as they tweet live from the food truck by using the hashtag #macyschefs.

“Food trucks are all the rage, so we are jumping on that trend and taking what everybody knows and loves about Macy’s Cellar and Macy’s Culinary Council and going on the road with it,” Amy Kule, group vp in charge of national special events at Macy’s, told Buzz. “Macy’s looks at special events as entertainment, and any time we can do something a little out of the ordinary, we like to do that.”