Lollapalooza Sponsors Turn It Up To 11 - Event Marketer 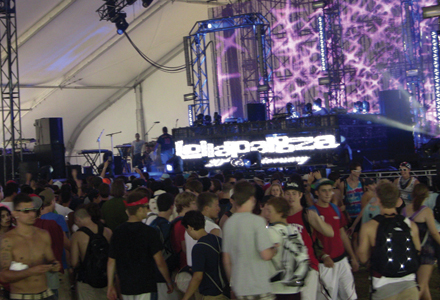 Lollapalooza Sponsors Turn It Up To 11

Lollapalooza this summer celebrated its 20th anniversary by once again taking over Chicago’s Grant Park with its signature three-day music festival. From Aug. 5 to 7, thousands descended on the shores of Lake Michigan to rock out and chill out to the sounds of headliners and indie favorites ranging from Eminem and Foo Fighters to Arctic Monkeys and Lykke Li. Key sponsors were there, too, of course, hoping to get a bit of attention from the thousands of music lovers and hard partiers who hit the festival over the weekend. Some activations were clever and endemic. Others hit a sour note. EM was on the ground, dodging the contact high and seeking out the sweet sounds of experiential success. Read on to find out where we found it.

Toyota
The world’s largest automaker set out to prove to festivalgoers that it is as cool as it is big. To that end, it activated in two distinct spaces and locations, on opposite sides of the park. The Free Yr Radio zone was a mostly open-air tent with a lean-to design. It housed an autograph stage, punching bag and a thematic tie-in to one of the oldest and most enduring internet memes, the lolcat, with the “Corrolla Can Has Cheezburger?” photobooth. And there were two Corollas, the highlight car of the space, on display. Tied into one of the cars was a pretty standard photo activation in the drivers seat. There was also a sweepstakes to win a new Prius. The Free Yr Radio program was created to promote indie rock music, making it a perfect fit for Lollapalooza, of course. To tie in with that message, the brand deployed a “name that indie tune” game called Say that Song in which players competed to win Toyota and Lolla swag.

Toyota’s other presence was an eco-friendly green zone called the Prius Playground.  Here, guests got a chance to beat the heat with a cool, ice-water-soaked limited edition Lollapalooza bandana or grab a sno-cone. But the cool down wasn’t free. To get one, each person had to do some time on one of the energy-generation stations that were providing power to the footprint. They could hop on an exercise bike to pedal up some power, or team up to take a ride on the seesaw to get the juice (and sweat) flowing. After the workout, fans signed up to take part in Toyota’s photo scavenger hunt, which placed targets all over the festival and, for those who solved the six clues and returned to the booth to show off the photographic proof, grabbed some swag and got a chance to win an iPad2. Cool.

Sony
Sony, too, went for a two-pronged approach, but took a different tack by making the two distant and huge tents part of one, unified feel. In the City@Play arena, which was closest to the main entrance, and the PlayStation Loft, which was right next to the Sony concert stage, the first thing the over-heated guests noticed was the air conditioning inside, set to freezing, which was almost cold enough. With that instantaneous good feeling kicking the experiences off with just the right note, Sony made the people feel right at home. If they lived in the coolest home ever. The tents were caked with Sony’s best and most desirable products. From more than 20 PlayStation gaming spots and laptop stations to the 3D TVs and video cameras, there was plenty to covet.

And the brand went ahead and indulged the envy it inspired by encouraging the festivillians to take part in the Play. Wish. Win. contest. To play, each person signed in and registered a barcoded card. With that card, they would swipe in at any of the gaming or entertainment sessions, and add the items they wanted to the virtual “wish list.” And the more wishes registered, the better the chances of winning the grand prize: everything they had put on the list. To get some social media love, there were plenty of Vaio stations in each activation area so that the attendees could recharge USB devices, and post photos from the ’palooza to their Facebook pages and Twitter feeds. And each tent had a unique Twitter hashtag, so they could tell their followers which brand gave them the hook up. So. Much. Fun.

Citi
Citi went subtle and because of that came off looking cooler than cool. The financial services brand’s 20th anniversary museum-style tent sported some very minimal signage and branding, but kept the focus on the exhibits—a smart move. Front and center, and placed all through the space, were the historic relics from Lollapalooza’s past. Stuff like guitars played at the festival over its two decades and video screens playing past performances drew lots of attention from weary-footed attendees looking for some shade and a seat. To accommodate them, Citi had a drinks bar, dozens of comfy white leather chairs and couches and a shady, breezy open tent space. Nice.

Google
The biggest disappointment and near-fail was the Google+ Lounge. A very small tent, with too many people inside made for an uncomfortable space, despite the air conditioning. Even so, the cachet of the Google+ signups on offer at kiosks kept people coming in. But the tight quarters kept ’em moving out, unfortunately. We wanted more.

adidas
The retro-tastic shoe brand had the most interesting space on the grounds, eschewing a tent for a gigantic shoebox, full of cool air conditioning, celebrity custom sneakers and deep engagements. Attendees lined up all around the box to take a turn, since the brand could only let about 10 people in at a time. Before going in, they got a chance to add some art to a giant sneaker positioned outside with markers on hand. QR codes printed on the outside of the box sent promo content to people waiting in line when they worked (the one we tried didn’t). Inside, a brand ambassador handed out some adidas swag before attendees got in front of a camera with a few pairs of iconic celebrity shoes to take a souvenir pic. The real attraction inside was the computer terminal where guests could design their own iconic pair of adidas, and enter for a chance to win their pair. EM