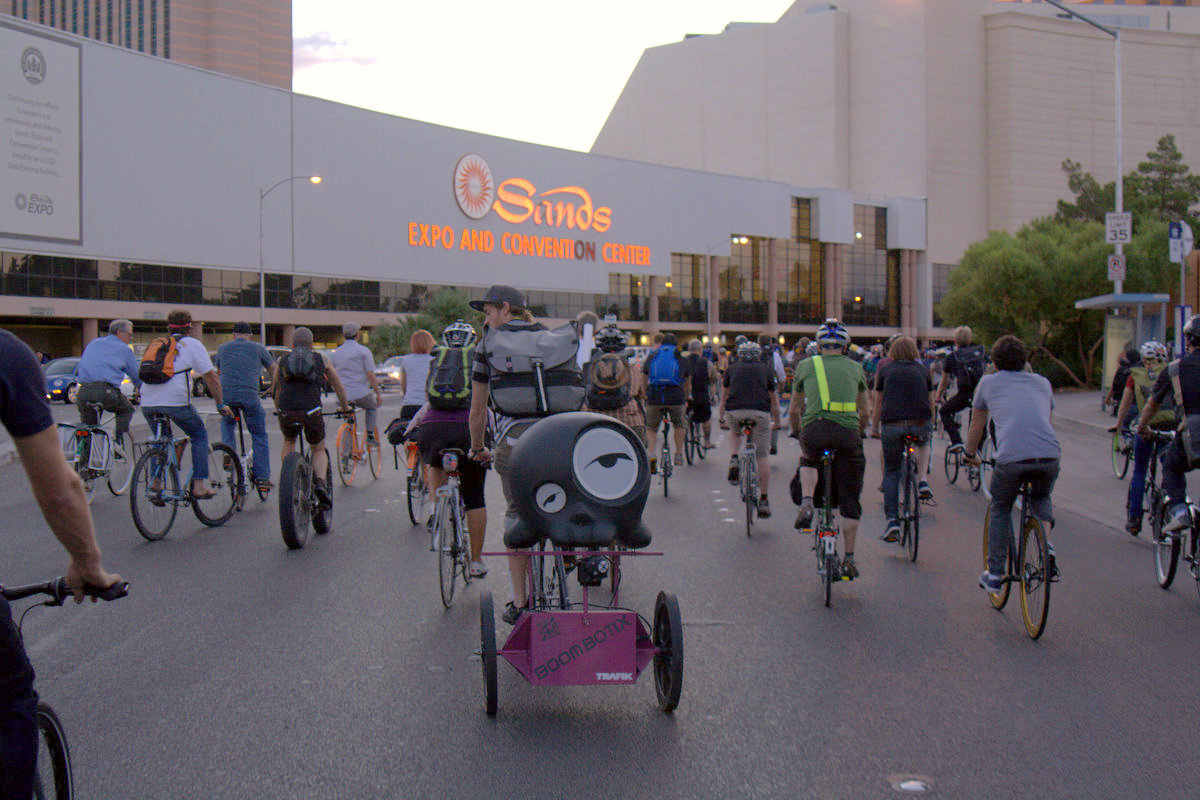 It’s easy to spot a typical attendee of the International Bicycle Expo. In knee-length shorts and a ragged t-shirt he wears Band-Aids as medals of honor and takes a comparative analysis of a new brake system more seriously than his stock options. Last September more than 1 200 brands engaged this die-hard crowd with the newest and latest in bicycle engineering sports nutrition gear and accessories at the annual Interbike Expo in Las Vegas. Sports celebrities were on hand to fuel the excitement. Demos including a two-day outdoor event kept the wheels spinning. While many exhibitors flexed their muscles in spacious and expensive environments creative execution of smaller footprints kept the spirit of fair competition alive. Which brands won the yellow jersey at this year’s show? Read on: EM’s tour de Interbike starts now.

Crumpler
The Australian urban cycling gear manufacturer placed attendees in the middle of an imaginary Crumpler metropolis complete with towers and floating zeppelins. The footprint resembled a maze of streets and shelving solutions with flush product displays were much like local burger joints or delis likely to be hiding behind corners of quiet lanes. The structure combined simple particleboard and fabric with seamless transition between the two thanks to the graphic print. Its monochromatic palette brought a sense of deep texture to the surfaces and created an overall feeling of a surreal sand castle. Bright color splashes of products on display made that much more impact. An engineering twist: constructed as a giant puzzle structural elements were held together by small pegs also printed with the same pattern which added to the overall rhythm and appeal of this carved cityscape. Design/Build: Tin & Ed Melbourne Australia.

Gatorade
A signature orange arrow suspended from the ceiling drew attendees to the sports drink giant’s booth from across the hall. After all with all the sampling of power bars one can get thirsty for some free hydration dispensed from the coolers common at football practices. The exhibit experience was based on the scientific approach the company embeds into its brand messages. A glass mobile lab property of the Gatorade Sports Science Institute was the focal point of the booth. Well-known athletes participated in a “sweat test ” designed to measure the amount of sodium they secreted and of course to draw in as many admiring fans as possible. Each athlete was taken to a small changing room in the corner of the exhibit where a technician took their vitals and weighed them. Then they proceeded to the glass test booth where patches were placed on their chest and thighs. After some serious spinning results were analyzed behind the same glass walls just inches away from attendees. Originally designed for b-to-b events this is the first year the lab was put on the b-to-c rotation. Handled in-house.

The Sock Guy
Electric-green grass might not have the most natural connection with socks but this distributor leveraged color intensity to make its product pop. A staircase decked in its signature-color fuzzy carpet grabbed attendees’ attention and directed it towards large graphics of products on the second story of the double-decker. Green suspended lights created the feeling of intimacy in an environment filled with products bound to get attention on anyone’s foot. A reception desk was covered with the same green carpet. Just like its target audience that see socks as means of self-expression the brand was not afraid to make bold statements with its space and with every green beam screamed that loud socks are hot. Design/Build: Displayit Suwanee GA.

Oakley
Leveraging its ‘contractor to the U.S. Special Forces’ theme the gear and sunglasses manufacturer incorporated the brand’s identity into everything from tush-friendly stools by the reception desk to plasma screens placed in cargo-type containers. Dense army-style netting covered two curved truss structures that housed product displays and meeting space. Some product families were presented in lounge-type environments complete with black couches and low tables. Intimate eyewear casings and rows of plasma screens were that much more effective with dark canvassed walls and partitions as a backdrop. Large metal clips and red straps added to the military-inspired theme. Already crowded throughout the day the space really filled up when kegs of beer were rolled out and the lounges instantly went from meeting spaces to the real thing. Design: In-house. Build: Lexington Los Angeles.

Shimano
With one of the largest properties on the floor the bicycle parts and gear manufacturer could have spent a little more time conceptualizing the layout and contemplating the no-go combination of gray carpet and blue product displays. However subtle design issues didn’t stop it from generating buzz at its rental double-decker display just across the aisle. To draw crowds to its shoe-fitting demo the company offered a promotion on its custom-fit riding shoes that drew a line around the block. Customers would put their shoes on and proceed to a machine that used a heat and vacuum process to contour the shoe to the consumer’s foot. Design/Build: Coeste Design Inc. Anaheim CA.

Brooks
One of the oldest bicycle seat companies in the industry brought to the showfloor an authentic representation of an old English country house—a perfect showcase for the 166-year-old brand. Enclosed on two sides the experience unfolded within with what looked like a home from a Sherlock Holmes story with wooden panels oil portraits and display casings suitable for a museum. A couple of original 19th-century bicycles parked in the corners added historical flavor and leather saddles and saddle bags promoted the product line’s high-brow appeal. The dark-green ceiling planks shaded just enough ambient light so the metal rustic lamps could fill the environment with a warm subdued glow. The collateral also fit the theme: product information was printed newspaper-style with headlines in Old English fonts. Hard to believe that the U.K. family brand is now owned by Italians. Design/Build: Simone Borsato Italy.

Sram
With now five brands under its umbrella this bicycle parts manufacturer had to create an experience that highlighted each of them and yet delivered a united message. The focal point was the Tech Bar—an oval structure in the middle of the footprint staffed by brand reps answering questions about gear switches and brake systems. A red circular sign over the bar served as a beacon and a visual anchor for four signs that separated the space by brands. The fifth brand occupied a completely separate environment on the other side of the double-decker that served as a meeting space a backdrop and a space divider. To promote its Hammer Schmidt product line the brand hosted a power hammer competition where attendees could whack a big yellow button and win t-shirts and other giveaways. Overall a large footprint with lots going on but still true to its brand identity. Design/Build: Pinnacle Exhibits Hillsboro OR.

Dude Girl
A great example of how to make a brand statement in a small booth this cycling clothes manufacturer maximized authentic details in every inch of its 10-foot-by-10-foot exhibit. The brand is rooted in a story of a Western cowgirl fighting her way into the boys’ world of rodeos and ranching which inspired the rugged look and feel of the booth. The walls were covered with tin from the roof off an old barn in Montana with pieces held together by weathered wood planks reportedly from the same barn. It served as a perfect backdrop for the brand’s clothes line. Wooden shelving stools benches and floors resonated with the theme and fostered the sense of durability and dependability. Woven baskets and little lamps with cozy lampshades suggested that while it’s a rugged product line it’s still just for the ladies. A cow skull suspended from truss together with outpost-style signage completed the look. Handled in-house.

Cervelo
Going with red in a sea of whites and blues is almost always a winner. Six displays that resembled bicycle frames propped the products up at eye level. The signature red color borrowed from the brand’s logo helped create a contrast with the chrome parts making it easy to notice each detail. The backdrop of the exhibit was an Octanorm structure decked in high-gloss red Plexiglas. It also housed meeting rooms and storage. The typography on the wall was repeated on a black-and-white carpet which created the sense of immersion. The layout allowed brand ambassadors to spend more time at the displays specific to each customer’s interests without interrupting other conversations or walking across the entire space. Design: Design Continuum Inc. West Newton MA. Build: Loran and Associates Randolph NJ.

Maxxis
This tire manufacturer leveraged the contrast of ovals and angles in this large exhibit space with excellent vertical dynamic. Self-illuminated pillars supported large-scale bicycle-themed graphics and plasma screens with looped racing footage. Plenty of brand reps were available to discuss the latest in tire engineering and to walk attendees around product displays organized by types of terrain. Each display was comprised of a two-pole support structure topped with semi-circular beams a nice visual echo of the product. A small double-decker in the corner served as an anchor for the architectural topography as well as private meeting space. Design/Build: Exhibit Effects.

Chrome
This brand took the average garage (you know the favorite hangout of biker dudes) and turned it into a functioning exhibit concept to showcase its urban cycling gear. The entire space was taken over by a square double-decker comprised of commercial scaffolding the company uses in its warehouse. Rough wooden planks served as shelving and flooring and created a rugged backdrop for messenger bags and jackets. Targeted spotlights worked magic in this overcrowded low-light environment crisscrossed with heavy chains. Product orders were written on storage cartons and in the meeting areas upstairs products were discussed amid ladders and tool boxes. This chaos was just what the attendees wanted as they felt right at home in this miniature rider’s heaven. Handled in-house.

Harland Clothing Company
In what looked like the most untraditional booth on the floor two women in Mary Jane-style shoes and knee-length skirts talked to attendees about their product—women’s clothes—which are designed for cycling but looking more like casual office wear. A framed photo of a nun riding a bike summarized the brand philosophy: you can ride in what you normally wear and stay comfortable too. The owner used its black tent usually taken to outdoor events and turned it into a tiny but very cozy living room complete with a sheepskin rug. Two black leather stools purchased from Target and two papier-mâché lamps from Ikea plus a simple white wooden end table with a bouquet of red flowers completed this low-budget but highly effective environment. Who said that a 10-by-10 can’t make a stand? Handled in-house.