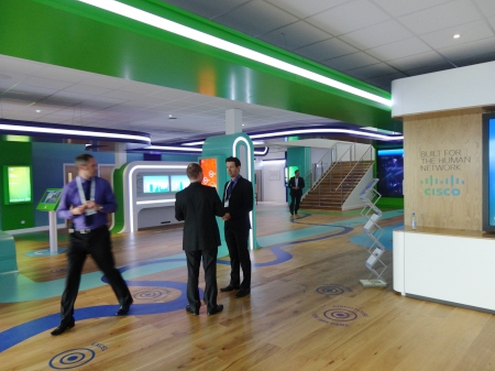 The Cisco House, a two-level b-to-b experience designed and built on the roof of the Westfield Mall and office park by the Stratford rail station, might just be the best Olympic experience few will ever set eyes on. And that’s the idea.

With a design that should help take future b-to-b Olympic experiences to the next level (cross the Samsung Pavilion at the Vancouver Games with an Apple Store), the space is super-slick, super-glossy and hardly looks temporary. Wood floors mixed with inlayed colored strips and ceiling-lit ribbons of color are just the start. Dubbed a 20,000-sq.-ft. “connected business showcase,” Cisco House does just that for its data, voice, video and new cloud services. The goal is to show current and prospective business customers “not what Cisco makes, but what Cisco makes possible,” says Neil Crockett, the company’s managing director of the London activation, who gave us a private tour. “This is not a selling experience. It’s a storytelling experience.”

All in, the eco-friendly Cisco House (built in 70 days) will host 11,000 guests, including the company’s 400 largest accounts. With near-Secret Service-level security teams (we almost didn’t get in) down on the street, guests first check-in and are cleared to enter an elevator, which takes them to the first-time Olympic sponsor’s lower balcony. From there they enter a sliding door into a main reception area, check-in (while a video of CEO John Chambers welcomes them) and receive a badge with a unique identifier on it.

The journey starts with a “Business Transformation Experience,” a two-part edutainment activation that provides a high-energy look at Cisco, its partners and the future. Guests enter a futuristic faux subway car, sit, put on 3D glasses and are immersed into a wall-width movie starring British actor/author Stephen Fry. The video, tying into the subway theme, starts at the Cisco House stop and ends at a “Future Central” stop. From there, guests walk through a timeline hallway filled with noted Cisco technology innovations and into a 360-degree projection room, in which a final video hosted by Fry but starring Cisco partners from such companies as SAP and EMC2 plays.

From there, visitors exit back into the large first-floor space, which features touchscreen case studies, augmented reality interactives (point a camera at the blue ribbon on the floor and the River Thames pops up on the monitor) and real-time demos of Cisco technology in action, including several Kinect-powered interactives such as a virtual shopping area that lets guests digitally try on clothes. Throughout the space, visitors can enter their badge numbers to receive more information on specific case studies/products.

The second level provides a casual hospitality and networking experience with a bar, food stations and more than enough couches and televisions (all wired to Cisco’s StadiumVision product). The top level also boasts a veranda, offering up a million-dollar view of Olympic Park. Elsewhere, Cisco had a small interactive for consumers over at Olympic Park. Folks could videotape themselves in front of a screen and after a data-collect see their video on another screen “in the cloud.” Agencies: George P. Johnson (Cisco House), Sportsmark (hospitality and guest program), Octagon (sponsorship strategy), Jack Morton (consumer cloud interactive at Olympic Park).

Check out some more photos here.