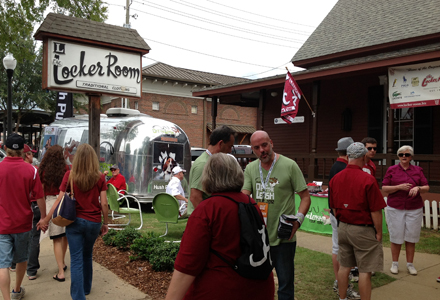 Hush Puppies Goes Off the Leash

Hush Puppies in August kicked off a six-week Off the Leash mobile tour that is taking its fall 2012 footwear collection—and its iconic basset hound mascot—to retailers, universities and music festivals throughout the Southeast. The effort marks the first mobile tour for the 54-year-old footwear brand, which is sold in more than 160 countries, as it seeks to update its brand awareness among a younger, hipper consumer base.

“We have high consumer awareness but it is not necessarily an accurate view,” Dani Zizak, vp-global marketing at Hush Puppies, told Buzz. “It connotes footwear that your grandpa wore or that you wore as a kid, and while both are very positive sentiments, we are a global, casual fashion brand. We felt the timing is right with what is happening in fashion and the brand being so on-trend, to begin a grassroots campaign.”

The centerpieces of the tour are a colorful 1967 custom Airstream trailer and the 18-week old puppy, named Penny, who is along for the ride. The tour includes stops at six Belk retailers in Alabama, Florida, Georgia and Tennessee; the Locker Room, near the campus of the University of Alabama in Tuscaloosa; and the University of Montevallo in Montevallo, AL, as well as music festivals.

On-site, a retail display showcases the footwear, which attendees can purchase at nearby retailers or order for home delivery. They can also have their photo taken and instantly forwarded to social media sites, including the brand’s Facebook page and Twitter feed, via a SMART Activator photo app. The app overlays their photo with a branded template such as Penny the mascot wearing sunglasses or the Off the Leash tour logo.