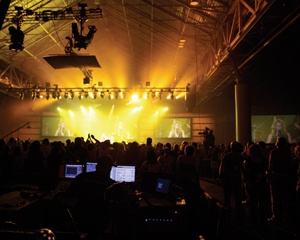 Music. It’s the universal language. What better way to connect with audiences than by playing tunes that energize, motivate or set a mood. And now, thanks to iTunes playlists, brand marketers can capitalize on the music they play at events and conferences to extend the life of the experience and sometimes even do a little good along the way.

Take AT&T, for example. For its second time as official communications partner of the U.S. Olympic and Paralympic Teams (after the summer Games in Beijing), AT&T joined with musicians to create an exclusive AT&T Team USA Soundtrack for athletes as they pursued their dream of competing in the Olympic Games in Vancouver. Songs and ring tones from the soundtrack, which included tracks by American artists such as 3 Doors Down, David Banner, Mariah Carey, Sugarland and others, were available through the iTunes Store and on AT&T wireless devices. Proceeds benefited Team USA.

“The goal was to raise money for Team USA, who we sponsor, and to promote our relationship as a sponsor of the US Olympic Team,” says Bill Moseley, senior marketing manager-sponsorships, at AT&T. “It was a way to reach out and tap into the passion point around the Olympics and music, two very passionate enterprises, and combine those to really drive home a message that we and the artists support Team USA. It was a way to tap into what we know is a keen interest in these artists and wrap that around enthusiasm for the Olympic Games.”

But the passion for music isn’t limited to youthful fans of downhill skiing and luge races. Sales executives and human resource managers also like to get their groove on, especially at annual meetings and conferences.

Mark Steele, vp-marketing at PSS World Medical, a national distributor of medical products to physicians and healthcare providers, describes his organization as a “high-energy, fun-lovin’” group. “When you ask our sales representatives to be in a building and sit down and be still, you also want to incorporate something that matches our personality, which is really an aggressive, driving, fun-loving, get-it-done organization,” he says. “So you want to make sure that you have music that matches that.”

The answer, for its general sessions of 1,000 to 1,200 people and smaller breakouts of 50 to 60, was high-energy entrance and exit music, chosen by the session leaders, on the PSS 2009 National Meeting Soundtrack (inVNT, New York City, handled).

At 10 p.m. sharp, during the after-party following the meeting’s closing awards banquet, attendees received an ePostcard from the conference organizers that included a link to iMix (a user-created playlist published in the iTunes Store) where they could download all or some of the selections.

“Each year we try to change things up and this provided an added touch different from what we’ve done in the past,” Steele says. “We were able to deliver a memory of the meeting in a digital format at low or no cost to us, which was one of our goals.”

Likewise, the Society of Human Resource Management (SHRM), at its annual convention for 8,000 human resource professionals last year in New Orleans also created an iTunes playlist of music played before its general sessions that attendees could download after the meeting to keep the feeling going.

“HR people show up as soon as the doors are open, maybe even 45 minutes before the session starts,” says Lisa Block, director of meetings and conferences at SHRM. “For years, people would approach the sound engineer and ask the name of a song or an artist.”

“InVNT came to us with the idea saying, you’ve always had this; wouldn’t it be a cool thing if you could deliver this, what your members have asked for, in a different way?” Block says. “It captured the moment in time, the experience they had at the SHRM annual conference, but also they got a neat mix of music.”

SHRM announced on the big screen that the music would be available at iTunes, mentioned it from the podium and put it on its website after the conference was over.

“It keeps the feeling going, but it was mostly kind of a cool thing to do that was different and was easy for the attendees,” Block says. EM