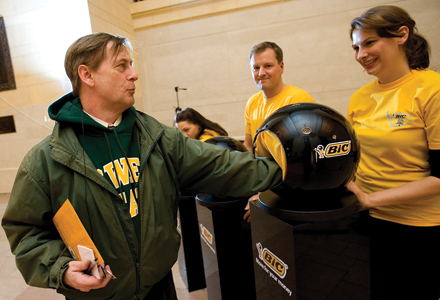 BIC and Microsoft Find the Secret to Commuter Activations

Stopping busy commuters in their tracks can often be a marketer’s biggest challenge. But when brands turn to innovative partnerships and engaging product sampling techniques, the high volume of meaningful touches they make can significantly increase sales and brand loyalty. Though the trick is giving consumers something worth stopping for, it’s equally important to have a backup plan in case they can’t. Microsoft and pen manufacturer BIC enticed hurried commuters to slow down this winter with memorable engagements at bustling train stations and busy airports. What’s the ticket to successful commuter-targeted activations? The brands explain.

Last holiday season, Microsoft executed a Holiday Photos on the Fly experience at 26 airports where it snapped holiday portraits of consumers with Santa Claus and then enhanced them on-site using Windows Live photo features, including Photo Fusion and Photo Mail. Microsoft partnered with Southwest Airlines to activate the experience, which was kept short enough so that it wouldn’t interfere with passengers’ flight schedules. When travelers walked up to the booth they received an eight-page holiday guide with information about the product, the program and its partners, including AT&T, Epson and Samsung, and a $20 discount offer for their next Southwest Airlines trip. The guide also provided a folder where consumers could save their printed photo. Once passengers took their portrait with St. Nick, they were directed to six kiosks where brand ambassadors wearing Santa hats demonstrated how Photo Fusion takes the best elements of a variety of photos to create the perfect shot and then, using Photo Mail, how the images can be sent to family and friends without clogging up email inboxes. The photos are saved on Microsoft’s SkyDrive online data storage service so consumers could download them at home in addition to receiving a printed copy on-site (Agency: 206 Inc., Seattle).

Though the experience went off without a hitch, there was a lot of behind-the- scenes work to make it happen. For starters, airports have restrictions and security issues a brand doesn’t have to deal with at a mall or retailer. Program staffers have to go through special training to get a badge and pass a background check. Microsoft alleviated some of the red tape by partnering with Southwest Airlines, which made working with the airport much easier and provided greater access to passengers. The partnership also allowed Microsoft to promote the program to the airline’s passengers in advance of their flight with a notice on their confirmation emails and boarding passes, which gave parents time to plan to stop for their picture with Santa once on-site.

“We wanted to do something with an airline for a long time and we really like Southwest’s brand essence. It was a really great partnership,” says Lisa Sikora, senior marketing manager at Microsoft. “What better way than during the holidays to experience something that sometimes you stand in malls for two to three hours for, and you pay $20 to $40, than taking it somewhere where people actually are.”

For non-Southwest passengers, Microsoft brand ambassadors donning Santa hats gave out brochures, directed travelers back to the booth and made announcements on the intercom throughout the day. It was especially important that Microsoft have a Plan B for passengers who couldn’t stay for the whole experience. In such cases, it invited consumers to take the photo with Santa and use the code on the back of their holiday guides to customize and retrieve the photo using Windows Live features on freeholidayphotos.com.

To promote its Easy-Glide System pens, BIC from Nov. 10 to Dec. 3, targeted commuters with an interactive experience at Grand Central Terminal in New York, South Station in Boston and Union Station in Chicago. The program kicked off at Grand Central where the brand put up an eight-foot by 12-foot crossword puzzle that could be solved using magnetic letters. Commuters could also play a sensory game involving three spheres that contained different textures, including a piece of silk and a smooth rock that tied back to the smoothness of the BIC pens. They could also learn more about how each pen is made in a video gallery that explained the manufacturing process. Even if commuters didn’t have the time to engage in all aspects of the activation, they at least walked away with a pen, a crossword puzzle and a sticky pad on which to test out the pen (Agency: Eventive Marketing, New York City).

BIC says bold visuals and multiple activities are the keys to getting commuters to stop and take notice. “Since many people are pressed for time, the event setup needs to look as eye-catching as possible. We made sure we had substantial BIC signage plus the use of our BIC Orange,” says Joe Franzino, senior brand manager-stationery at BIC. “You need to ensure there is enough going on at the event to provide a high level of intrigue for commuters to stop. We did that by utilizing the giant crossword puzzle, in addition to multimedia displays for the event. Plus, utilizing highly trained, vocal and extroverted brand ambassadors is essential.”

Though not as strict as airports, train stations also have security guidelines that a brand must follow. At Grand Central, BIC was assigned security staff while on-site, including during load in and load out. Though these stations are used to accommodating experiential programs of this nature, it’s still important to allow a minimum of 30 days for planning.

Although they’re on the go and pressed for time, commuters will stop when offered something special and relevant. Microsoft provided passengers with timeless, quality photos. BIC tied its theme to an organic component of commuters’ lives—the crossword puzzle that accompanies them on their daily commutes. Meaningful touches like these are what make the difference. “When we let people experience our product we always see a brand preference shift and huge numbers,” says Sikora.