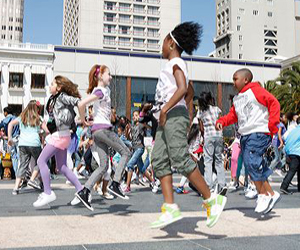 Swedish retailer H&M on March 27 surprised onlookers in San Francisco’s Union Square with a flash mob of 55 dancing kids decked out in jeans and sporty, colorful t-shirts, jackets and dresses from the store’s children’s apparel collection. They engaged in a hip-hop dance battle that lasted four minutes but has garnered thousands of views on YouTube. Bystanders captured the performance on cell phones and cameras and received fliers for 20 percent discounts on kids’ apparel purchases through April 4.

The spectacle began when a member of the stunt team began to play the bongos and another member, a young dancer, flaunted his moves—and fashion—before a duo of “unsuspecting” breakdancers. The challenge grew into a huge synchronized performance choreographed to the strains of “Set it Off” by Izza Kizza. Afterwards, the performance moved one block away to H&M’s flagship store, where the kids continued dancing and celebrating the clothing.

“Our children’s collection this season is all about being playful, colorful and accessible to everyone, and we wanted to do something different and surprising in one of our key markets to show that we are the fun of fashion. Being that our global campaign this year was shot in San Francisco, Union Square was a natural choice,” Steve Lubomski, U.S. marketing director at H&M, told Buzz. Agency: Mr. Youth, New York City.