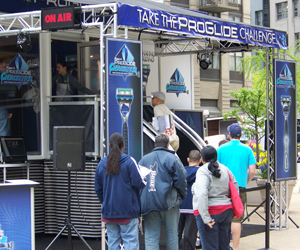 Even though it’s new razor, the Fusion ProGlide, won’t be on shelves until June 6, Gillette is getting the word out now with two recent tryout events in New York City. On April 7 at Times Square and April 10 next to the Flatiron Building at Fifth and Broadway, the brand set up the “ProGlide Challenge” where men pitted their five o’clock shadows against the new razor’s five blades and vibrating handle, with the assistance of several of Gillette’s soothing lotions and creams.

As consumers wandered by, brand ambassadors approached them and offered up a free shave, as long as they didn’t mind being filmed. After a little data collection, which included a phone number, email and mailing address, a photo/video release and an instant photo, the (mostly) men were in line and ready to shave. Frequently, passersby asked the people in queue if there was a free razor to be had, and many passed by once they found out there wasn’t. Those that made it to the front of the line were led inside the “salon” where another brand representative explained all the products available and how to use the razor’s unique features, then left them alone to shave themselves. One third of those who did the trial were filmed and taken into a photo booth for an exit interview. The rest were asked for informal impressions of the razor and ushered to the door, but not without a surprise. Each received a free ProGlide (battery included) to keep, contrary to what they were initially led to believe.

“We wanted men to try it for themselves so that we could get their honest feedback,” Gillette spokesperson Mike Norton, told Buzz. “We’re happy to report that the feedback thus far has been overwhelmingly positive and we’re looking forward to introducing Fusion ProGlide in June 2010.” Agency: Pierce, Portland, ME.