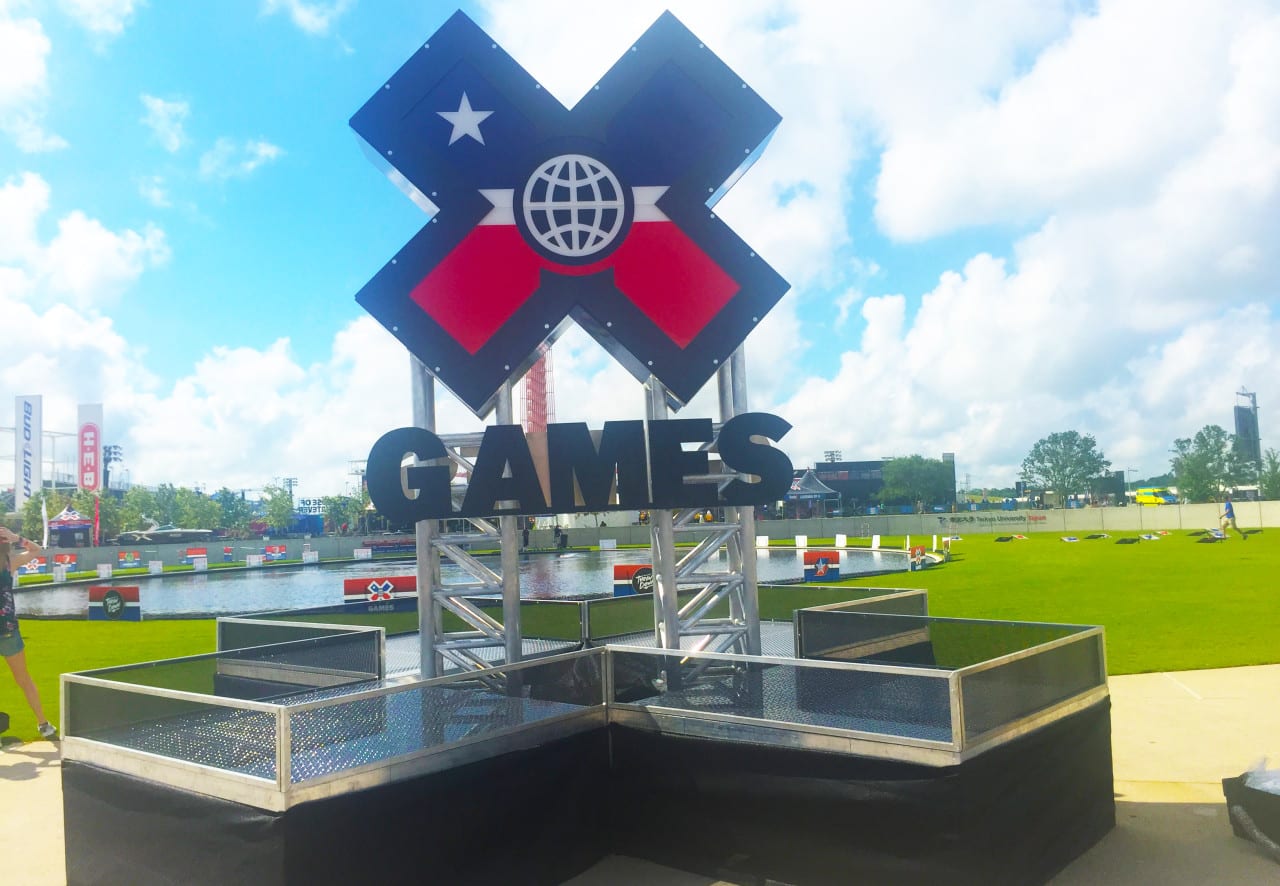 The ‘X’ in X Games stands for Extreme—and the name is no exaggeration. The fans are as diehard as they come, the courses are state of the art and the event showcases some of the most jaw-dropping athletic stunts known to mankind. And over two scorching days at Austin’s Circuit of the Americas Grand Prix racing track, EM took it all in—the sports, the sponsors… the sea of jean shorts.

At a sponsor village dubbed the Galleria, a variety of brands battled for the attention of X Games attendees with engagements that ranged from pull-up competitions to beer school. Here, a look at the most memorable activations brands had to offer as we combated the Texas heat and dove into the 21st annual summer X Games.

Fruit of the Loom

The brand challenged consumers to take the “tuck test” by riding a mechanical bull while donning the redesigned, stay-tucked men’s undershirt. Crowds of onlookers cheered along as brave participants were tossed around the faux arena in an attempt to make the tuck greater than the buck. Partakers competed with others to make it onto the leaderboard with the top riders for the weekend and received a free pair of boxers for participating. Anyone walking past the booth couldn’t help but stop and stare at the spectacle before moving along. Agency: Crispin Porter + Bogusky, Miami.

The famous “House of Whatever” made its way to Austin, offering different activities in each room of the dollhouse-like structure. Attendees could get a temporary tattoo in one room, shred on “Guitar Hero” in the next, then take photos using a whole host of silly props and cap it off with a cold beverage from one of two bars inside the footprint. A well-placed viewing balcony atop the house offered a VIP-esque experience.

In addition, brand ambassadors flooded both the footprint and the event at large, using iPads to record consumers’ bucket lists (one man is nobly striving to get drunk in space before summer’s end). The brand also employed surprise and delight elements throughout its sponsorship, but its “beer school” was the pick of the engagement litter.

Chris Wood of the Anheuser-Busch brewery in Ohio served as the course instructor to consumers who opted to occupy desks inside the imitation classroom. There, pupils learned about the brewing process for various styles of beer and determined which kinds were most aligned with their palate. Jars of different hops were also on hand to supplement the educational experience. Agency: Mosaic, Dallas.

In addition to sponsoring the inaugural Flat-Track Racing competition, the brand offered LiveWire Jumpstart riding experiences, which gave consumers a chance to take a simulated ride on Harley’s new electric motorcycle. The brand also hosted appearances by X Games athletes and offered a photo engagement in front of the XR-750 racing motorcycle. Fans could additionally enter the Choose Your Ride Sweepstakes to win a 2016 Harley-Davidson motorcycle of their choice via various iPod stations sprinkled around the footprint. A variety of bike models on display appeared to increase consumer dwell time, although the scores of booth babes probably didn’t hurt. Agency: Starcom Mediavest Group, New York City.

Autograph signings with Team FRAM athletes, UFC fighters and X Games competitors scored the oil filter brand some serious love with sports enthusiasts. Consumers could also compete to win daily prizes via emcee promotions and head-to-head digital games, including a modern-day branded version of the carnival favorite Whack-A-Mole (Whack-A-Filter, anyone?). Consumers could additionally take advantage of a photo opportunity in front of a customized backdrop. Those who posted their photos to social media from the booth using #doitright had the chance to spin a prize wheel and win Team FRAM athlete-autographed memorabilia, sunglasses, gift cards and more. To boot, FRAM’s brand ambassadors were friendly and energetic, making the booth hard to miss in a sea of sponsors. Agency: The Richards Group, Dallas.

The military branch occupied a large footprint, including two gaming stations that gave attendees the opportunity to get a taste of various naval duties. Participants who tested out the Robotic Rover station used a camera (operated via a handheld controller) to navigate the rover and deactivate sensors in each zone. The experience demonstrated how robotic technology allows Navy operators to remotely move into position and gather intelligence. Participants could also try the Robotic Quadropod, which required navigating around obstacles to deactivate sensors, and highlighted the role of Navy Explosive Ordnance Disposal technicians.

The space also included a small ship staffed with sailors and two photo engagements that encouraged social sharing using #AmericasNavy, including an impressive 3D chalk drawing that placed the participant inside a diver’s world. Consumers were also invited to take on the Navy Warrior Challenge (a pull-up competition). On-site Navy personnel were not exactly friendly, but they defend our country, so we’ll give them a pass. Agency: Campbell Ewald, Detroit.

The brand’s GoPhone booth was small but there was no lack of engagement. Consumers had the opportunity to receive a customized tote bag or towel via an on-site etching machine. An umbrella-covered table with charging ports for a variety of devices gave attendees a chance to relax and recharge while their items were being designed. In addition, those who participated in the brand’s photo engagement using #GoodToGo on social media were showcased on a large TV screen within the booth. Agency: Mosaic, Dallas.

A different AT&T U-verse booth offered its own attractions. In addition to helping consumers find out whether or not the location of their home was compatible with the digital cable service, brand ambassadors handed out mini sunscreen bottles—a well-placed giveaway during a sizzling weekend in Austin. The booth’s top engagement invited attendees to “bobble” themselves, which involved superimposing a picture of their heads onto the cartoon body of an X Games competitor performing a stunt in front of Austin’s capitol building. The bobbled picture was then emailed to the participant—and while it was plenty of fun, let’s just say no one looks good with a helmet on. Agency: The Marketing Arm, Dallas.

A whole host of engagements took place underneath the brand’s expansive tent, but its 180-degree Tacoma photo booth was a stand-out. The booth utilized bullet time, meaning a photographic effect created by a semi-circle of cameras took consecutive shots of the participating consumer, creating a collection of photos taken from slightly different angles. The images were then edited together to create a “Matrix”-like cinematic effect. The results were sent to the participants, who were encouraged to share them on social media using #LetsGoPlaces.

Other engagements included a custom license plate-making Sublimation Station powered by iPads, a Skee Ball game (which took place in the back of a RAV4) and a Spin to Win station. The dj spinning tracks throughout the experience boosted booth energy. Agency: Anthemic, Los Angeles.

The energy drink giant occupied an impressively large footprint just outside the entrance to the event that was heavily branded in its signature black and green branding. An elevated portion of the booth offered up comfortable lounging areas, along with a Monster Energy bar where a wide selection of the brand’s beverages were handed out by brand ambassadors. On the ground level, an outdoor lounge with tables and umbrellas offered consumers a break from the heat. A dj spinning upbeat tracks throughout the experience made the space feel more like a club than a sponsorship booth. Agency: TK.

To promote the release of the fifth installment in the popular film series, Paramount teamed up with Slackline Industries. Consumers were encouraged to try out a slackline course located just outside the Mission: Impossible booth to get a taste of what the movie’s daring stunts are all about. The brand also offered a photo engagement that superimposed attendees’ photos into a scene from the movie in which they appeared to be hanging from the side of an airplane. The photo was printed on-site and participants’ mission, should they choose to accept it, was to share the image on social media. The booth also offered branded swag, including Mission: Impossible sunglasses. Agency: In-house.