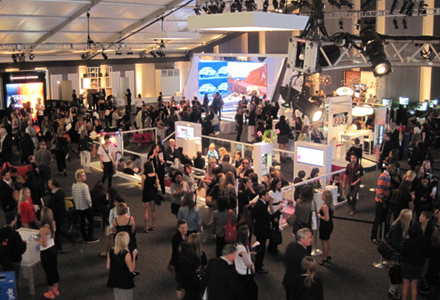 After 18 years of pitching its iconic tents at Bryant Park, New York’s Mercedes-Benz Fashion Week has uprooted the stakes. This fall the show moved to Lincoln Center, a venue farther from the Garment District, yet considered a hub of refined culture and art. EM scoped out the new digs and chatted with IMG’s Christina Neault, executive producer of Mercedes-Benz Fashion Week/IMG Fashion, about the move.

By all accounts, the most notable difference for attendees and designers alike was the dramatic increase in space. Whereas Bryant Park spanned between 75,000 and 85,000 square feet, depending on the season, Lincoln Center offers approximately 110,000 square feet for runway shows and presentations. The capacity for producing additional events was a welcome improvement for Neault. “There is more opportunity for presentation space and more room in the lobby for holding crowds, checking in, that type of thing,” she says. “Plus, the designers have the ability to do things in ancillary spaces, such as the new glassed-in courtyard space.”

Equipped with seating and Wi-Fi, the courtyard area served as an optional venue not only for press interviews and photo shoots, but also for presentations by designers not doing a runway show. Unlike Bryant Park, the new layout enables attendees to see both, due to the close proximity of the presentation area to the runways. “People could view the runway shows and then step out to see another designer’s presentation at 10 minute intervals,” Neault explains. Some designers with associate memberships, meaning they are part of the show yet not on the schedule, such as Catherine Malandrino, were able to remain on-site, 200 feet away from a tented show.

According to Neault, the new spaces contributed to the largest roster of designers since 1993. Another factor contributing to its size was the historical significance of the venue change. “I think everyone was more nostalgic about it than anything, but once they got there and saw the improvements, whether it was our new check-in system Fashion GPS, the polish of the venues or the elegance of the space around it, I think it became home very quickly.”

With the lobby area at Lincoln Center more open than Bryant Park’s, some sponsoring brands, such as Tresemmé, were able to build two-story booths, and include rooms for blowouts, product sampling and touch-ups. Another brand that fared well was American Express, whose Skybox experience was built this year with larger windows, better sightlines and a more exclusive private entrance, according to Jessica Igoe, vp-global sponsorship and event marketing at American Express. Press enjoyed a roomy upgrade as well. The media center at Bryant Park was typically off the beaten path, but this year it was contained in a sunken space in the lobby’s center, with much improved visibility. “Press will find a stair—or anything—to sit down and do their story,” says Neault. “Now it’s more formal, and a little easier for everyone.” EM