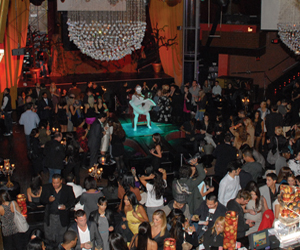 Flash nights, or on-site pre-promotions, can make a marketing event more than a one-night stand. These supplemental parties are smaller in scope but offer a taste of the big event to come. They can also build anticipation and word-ofmouth buzz in a way that promotional posters and other traditional methods can’t.

Premium Russian vodka brand Stolichnaya last year used the strategy to arouse interest in The Moskova Affair events at bars and clubs. Prepromotions likewise built buzz for Dos Equis’ Most Interesting Academy program. Even nonliquor brands can get in on the action, as Seventh Generation proved with events leading up to its Million Baby Crawl.

Stoli’s 10-week, multi-city The Moskova Affair tour, a brand experience developed to introduce young urban sophisticates and Stolichnaya distributors to its newest flavor, Gala Applik, took place in large upscale venues such as M2 Ultra Lounge in New York City. Attendees sampled Stoli cocktails and watched performances by Vau de Vire Society, an avant-cabaret group of acrobats, aerial artists, contortionists and side-show acts who mingled with the crowd as part of an interactive circus. A “forbidden fruit” theme playing off the new apple flavor set the tone for the evening.

“The idea was to bring to life the essence of the brand, which is Russia, intrigue and passion,” says Elizabeth Costa, senior brand manager at Stolichnaya.

Dos Equis employed a similar strategy to promote its Most Interesting Academy, which it positioned as “the world’s premier institution dedicated solely to the study of being interesting.” The Academy’s distinguished emeritus and patron sage, of course, was its advertising icon—The Most Interesting Man in the World.

At the Academy, attendees enrolled in classes such as Circumnavigating the Globe, Command of the Animal Kingdom and the Art of the Bluff. All in all, seven online courses rolled out over four months to encourage continued consumer engagement. Each course provided interesting real-world knowledge accompanied by fun challenges utilizing the newly acquired skills.

The virtual academy served as the main campus hub and was supported by live satellite campuses and on-premise activations that rolled out over the key summer selling season. These on-premise activations involved flash parties in key markets that built excitement for one-day spectacular events that brought the full Academy experience to life for the consumer and created word-of-mouth buzz.

“In order to stand out from the crowd, we set out to turn the conventions of the category on their heads and focus on differentiating the brand from an emotional and lifestyle perspective,” says Paul Smailes, Dos Equis brand director at Heineken USA. “Our challenge became clear—don’t just shout at him like everybody else, help him achieve a goal—to be seen as interesting and to have social currency.”

The flash parties helped Dos Equis achieve that goal. According to IRI data, Dos Equis is up 29 percent in case volume and has become the number eight imported beer (Agency: Mirrorball, New York).

Seventh Generation, the non-toxic and eco-friendly household and personal care product brand, created an online and offline grassroots campaign to educate parents about dangerous chemicals in their homes. Its Million Baby Crawl was an online effort that this past January sent infant avatars crawling to Washington D.C. to “rattle” legislators for toxic chemical reform. In addition, on Nov. 18, live events in Boston, Denver, Minneapolis, New York City, Portland, OR, and Seattle provided social networking and educational activities for moms and sampling opportunities for the brand.

Four weeks prior to the live events, Seventh Generation reached out to moms via free educational opportunities like prenatal and nutrition classes, stroller classes and activities moms could share with their children. These events may not be as hip as a flash party at a cool New York bar or night club, but they raised awareness for the campaign and garnered critical support for the initiative (Agency: LeadDog Marketing Group, New York City).

“We were able to talk to moms in a more intimate setting and provide education around the issue and have a good dialogue,” says Maureen Wolpert, senior brand manager at Seventh Generation. “We didn’t approach it as a traditional community marketing campaign where you go to big events and push a lot of samples. What was more important to us was the dialogue and the one-on-one. We did that for a period leading up to the event and built awareness that way, on a smaller scale, and that created interest in the event itself.” EM