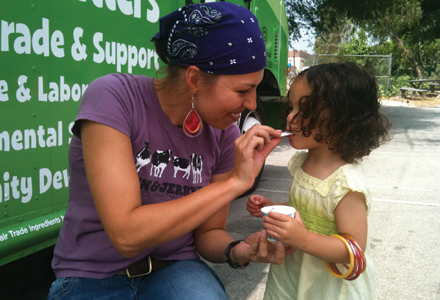 When it comes to delivering a personal touch, other marketing disciplines have nothing on experiential. So when social media came on the scene, it was only natural that the two forces would come together to create a killer combination of live and virtual experiences.

No program proved this more true than this year’s Grand Ex Award winner Mountain Dew and its DEWmocracy program, an integrated campaign that utilized social media sites to help guide and shape not only the flavors of the new Dew and the product packaging, but where the tour would stop in each region of the country. This summer, democracy was on the move again as Ben & Jerry’s hit the streets of Los Angeles, Miami, New York City and San Francisco with its ice cream trucks on a summer tour that this year focused far less on fixed event dates and more on personalized consumer requests via Twitter. (Top that, Dairy Queen!)

The trucks went to one fixed event a week with four days open for social media requests, which varied from stops for single requests to pleas for an ice cream break for an office of 500 people. The brand reinforced its Twitter component by plastering its Twitter handle on the side of the trucks and mounted on a screen displaying its Twitter feed.

“We’re looking to drive online conversation and word of mouth to keep the brand top of mind for people in these markets and ultimately increase sales,” says Jay Curley, integrated marketing manager at Ben & Jerry’s. “So we’ll come to people’s offices and feed the 50 people they work with and then they get to be the hero, because they brought Ben & Jerry’s to them. They will likely brag about it on their social spaces and a lot of their co-workers will mention it, take photos and share the experience.”

How did the Ben & Jerry’s team pull off a tour that was almost entirely dictated by consumers’ requests? EM’s got the inside—wait for it—scoop:

THE SETUP
When it comes to planning a consumer-driven tour, do marketers need to unlearn what they have been doing for years? In short, yes. Unlike traditional tours where stops are pretty much set in stone, with this new approach teams need to be flexible. In Ben & Jerry’s case, handling agency Manchester, NH-based Gigunda Group, sent out online alerts about which neighborhoods they would be rolling through each day (Social Media Integration: Edelman, New York City). As requests poured in it was critical that the team be ready to handle not only requests for the same block, but also requests spread out from each other. “When we route the teams we have to make sure that they have enough product for these particular stops and that the times we set up with those stops fit, because maybe the consumer is going to be at lunch. So we need to be flexible with the people that make the request to make sure it’s going to fit in their time window,” says Alex Miniak, account coordinator at Gigunda, who is part of the home office “command center” team that serves as a filter for the staff on the ground and all of the other partner agencies involved. “If our field teams were receiving direction from a number of sources it could prove very confusing. We try to get as much data as possible from everyone involved, then prioritize, determine our best opportunities and locations and then filter it onto the teams.”

THE STAFF
Though the command center is an integral part of the tour, it’s equally important to have the right people on the ground. “It takes a very special field manager out there to be able to not only be very detail oriented but at the same time also be very flexible. This person needs to be able to run with new information really fast,” says Gigunda senior account executive Tracy Durocher, adding that team members with local knowledge of each city is a must, too.

THE STRATEGY
The tour primarily targeted professionals in their 20s with the objective of not simply reaching the demographic at large events, but through meaningful engagements like the personalized Twitter requests. On the Fourth of July in San Francisco, the team had the option to sample at the annual fireworks display but instead opted to stop by people’s backyard parties. “You’re not going to get thousands upon thousands of people but the impact is going to be so much greater,” says Miniak. “We’re making it special for them and in turn they’re going to tell their friends and they’re going to remember that for a long time.”

THE CHALLENGES
Though this type of tour is all about immediacy, getting health, parking and event permits for public places in each city can slow down accommodating requests in real-time. So if a consumer’s request says, “Come to Central Park,” the truck can’t just roll up and start giving out ice cream. But it can make personal drop offs at people’s homes and offices, in which case they just hand deliver product and go on their merry way. “This could be seen as a disadvantage and when we first started the program it was something we grappled with but it has evolved and we see it as a real positive that we can do more one-to-one ice cream deliveries,” says Curley.
We’re located in Norwalk, CT, and our favorite flavor is Cherry Garcia.  EM