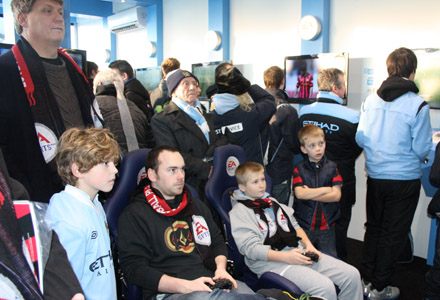 In the United Kingdom, football, or soccer to we colonists, is the number one spectator sport, and EA’s FIFA soccer game is the biggest selling title for the game maker in that country, too. To keep the marriage happy and grow its market, the brand has established a permanent footprint called the EA Sports Blue Zone on the grounds of the Man City football club stadium. The glass-walled structure is designed to attract attention and sports fans inside to play FIFA 2012 and push the online gameplay at least an hour before and after the team’s home games. EA used motion capture to incorporate the team’s players into the game.

The structure has 11 PS3 and Xbox stations inside so that fans can get some game time, and it’s free as long as they can show a ticket for that day’s game. To build buzz for online play, the brand helps the attendees join the Man City online gaming community so they can compete against other Premiership Clubs and their fans all over the U.K. On Wednesday nights, when there is no game on, the brand opens the Zone for 25 people for a “Learn to play FIFA” night, designed to attract 30-year-old sports fans who might enjoy football, but don’t usually play video games.

“EA wants to be part of the football world and Man City is one of the top teams in the Premiership, so we asked how we could link to that club and give the fans a unique experience and enhance their day,” Penny Humphrey, head of retail and experiential marketing at EA, told Buzz. “It’s about getting in deeper with the fans and adding more fun to their day.” Agencies: Circle Agency, Reading, U.K.