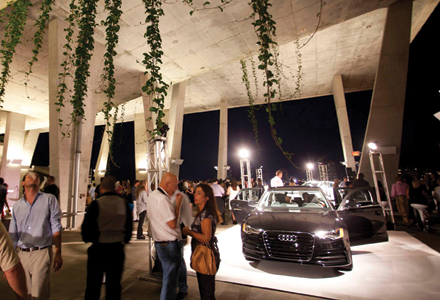 When it comes to hosting high-end hospitality events, most brands think you have to go big or go home. But with a test program in its South Florida market, Audi is working on a new formula that still goes big—in style and boldness—but stays refined and focused when it comes to generating measureable results.

Around the world, Audi holds a solid footing in the luxury and performance car markets with BMW and Mercedes-Benz. But here in the States, it is a bit of a challenger brand, fighting for consumer mindshare along with Lexus, Toyota’s luxury line. Now, with two big launches in the last six months (the 2011 A6 and A7 models), the brand’s South Florida dealerships saw a chance to create big buzz by aggressively targeting the competition and re-acquainting itself with its own fans and drivers. To do that, the dealerships teamed up for the first time ever and worked with handling agency Siinc in Miami to put their heads together, reexamine all the old formulas and seize an opportunity to create two world-class events that would lead to trackable sales results and growth in this important market.

“South Florida is a huge market for us, and succeeding there is a good sign for expanding these programs to the rest of the country,” says Maggie Mohiuddin, Audi’s marketing manager in charge of its southern region. “When we think about what we want to do, we try to be progressive. A cheese tray won’t cut it any more, but we don’t want to just throw a party either. We need to have tracking and measurement, too.”

The wow factor and panache came from leveraging two one-of-a-kind, non-traditional venues: the A7 launch at the New World Center, designed by architect Frank Gehry and home of the New World Symphony; and the A7 at 11 11 on Lincoln Road, a parking garage designed by Swiss architects Herzog & DeMeuron.

The ranks of the almost 1,000 guests at the two events were the other key ingredient. They were selected from local BMW M-class and Mercedes E-class driver databases, in addition to current Audi owners, and people living in high-income and high-Audi ownership zip codes. Those who owned competitors’ cars and especially attractive Audi fans were invited in classic high style, a la Emily Post, with hand-written invitations designed to showcase the exclusivity of the events and to make it clear that anyone who was anyone would be there. Others were invited via email.

“We try to ask ourselves, ‘Would another car company do that?’ If we think they would, we do something else,” Mohiuddin says.

Once they RSVP’d (and how could they not?), the tracking began, and it’s still going on. Audi laid off the marketing materials about the cars, wisely letting the vehicles do the talking for themselves. Instead they followed the old adage of “show, don’t tell” and made sure every contact exuded exclusivity and luxury by using only high-end materials for the invites and exquisitely designing them to suit the mood.

Of course, on event day, which for the A7 was in May and in June for the A6, the plan was to let the cars be the star, and as such, the venues acted as the night sky that let them shine. At the New World Center, which just opened in February, this was the first private event to be held at the plaza and the first vehicle ever to appear there. The plaza is uncovered, so the brand designed and created the two custom mini-tents to provide for weather without conflicting with or taking away from the aura of the building. The Center is a monument to style and graceful proportions, which was the correlation Audi was hoping to build with the A7’s own sleek lines. “It’s a cool building and it’s a cool, trendy car,” Mohiuddin says.

For the A6, the more non-traditional 11 11 building was chosen to remind the attendees that this is not a traditional luxury sports car. The building is a parking garage, but is so airy and light it seems more like what a parking garage would aspire to be, with its panoramic, 360-degree view of the Miami skyline.

During the evening receptions, the automaker invited the carefully chosen guests to schedule a test drive and, as a result, provide it with valuable tracking metrics that will tell them exactly how many attendees will buy an Audi over the next 90 days and whether the event was a major force in that decision. It was a gentle invitation, however. No salespeople from the dealerships were allowed to attend either event, though there were brand experts on hand to answer questions about the cars. That way, everything felt relaxed and the attendees were left to make their own, inevitable decisions.

And they decided overwhelmingly in Audi’s favor. Altogether, 879 people came to the parties to enjoy the music, tasty treats and more than anything else, the Audi experience. Of those, more than half scheduled test drives at a local dealer right on the spot and almost everyone entered the contest for a weekend Audi R8 driving experience in California’s Napa Valley. The tracking is still going on, so it’s too early to tell how many will buy, but Audi is optimistic.

“Buying a car is a very emotional purchase, and people will judge each other based on the cars they drive,” Mohiuddin says. “We want people to feel strongly about Audi and the number one purpose of these events was to help people feel that” (Handled by: Siinc Agency, Miami, FL).  EM