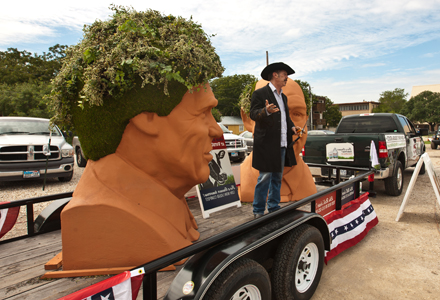 Environmentally friendly liquid compost Cow Wow is making some “poo-litical” noise this election season with its Heads of State tour. The centerpiece of the program is a pair of six-foot-tall Styrofoam and fiberglass busts constructed in the likenesses of Texas Gov. Rick Perry and his opponent Bill White that sit atop a 16-foot trailer. The tour is making appearances at festivals and retail stores throughout Austin, including Sprouts Farmers Markets and at the Austin City Limits Music Festival Oct. 8-10.

Consumers are encouraged to take pictures with the busts and take home hand fans and stickers that drive them to votecowwow.com where they can cast their vote in the Cow Wow “hair off” for either Perry or White’s hairdos (think Chia Pets), which on the busts are made of ivy and moss and treated with Cow Wow. The tour kicked off Sept. 23 on South Congress Avenue in Austin, where singer, satirist, author and politician Kinky Friedman, who is known in the Lone Star state for picking on Perry’s hair, added fuel to the fire as the campaign’s spokesperson.

“We hope the tour raises interest in our major markets and, in particular, we hope that because it’s politically-oriented that the state entities like parks, public grounds, forestry and department of transportation maintenance, embrace the idea of cleaning our air and our water in Texas, while nourishing the soil and plants,” Leslie Hearne, president at Cow Wow, told Buzz, explaining that Cow Wow is sustainable because it’s harvested at dairies when it’s just 20 minutes old and hasn’t started to decompose. Cow Wow manure also isn’t dumped in the dairy’s lagoon, which pollutes ground water and releases toxic gases.

“We sell poo and we didn’t want to market it in a traditional way, because it doesn’t engage our customer,” Hearne said. “Even though it has a great name, it’s not enough. The whole intent was to go viral with it to create an online campaign to capture the imagination and create love for the Heads, and we can only do that with interaction.”