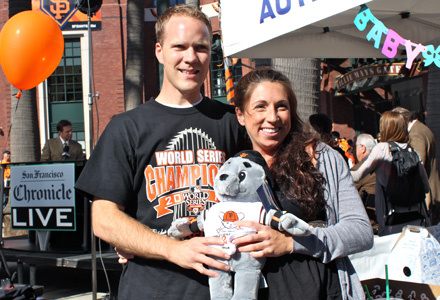 Comcast SportsNet Bay Area has launched “The Search for the World Championship Baby,” the lucky child who will be born closest to August 1 at 7:54 p.m., exactly nine months after the San Francisco Giants baseball team beat the Texas Rangers to win the 2010 World Series, its first pennant win in 52 years. The campaign capitalizes on the fact that while some Giants fans acknowledged the championship with toasts and high-fives, others celebrated, um, more privately.

To promote the contest, and keep excitement of the World Series win top-of-mind, the cable broadcaster on July 19 held a “World Championship Baby Shower” at the Willie Mays Plaza at AT&T Park, during its live studio show before the Giants versus Los Angeles Dodgers game. Twenty expectant moms showed up at the shower where they munched on cupcakes and received stuffed Lou Seal dolls (the Giants’ mascot) wearing baby bibs. Altogether, more than 400 women have entered the contest.

The World Championship baby will be announced in the paper, receive a commemorative secured brick at AT&T Park inscribed with its name, a gift card for $2,010 and an official birth certificate signed by the Giants.

“This is a fun and funny way to talk about something that happened last November and make it fresh,” Tom Pellack, vp-marketing at Comcast SportsNet Bay Area, told Buzz. “It’s a way to stretch out the glow of the world championship that they had.” Agency: BBDO, San Francisco.