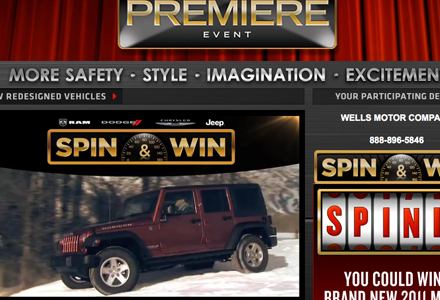 To encourage test drives and drive foot traffic into its dealerships, from March 16 to 23 Chrysler is executing the Premiere Event, an integrated campaign that offers consumers $25 gift cards and a chance to win a 2011 vehicle. Almost 2,000 of the group’s dealers, representing 86 percent of the Chrysler, Jeep, Dodge and Ram dealership roster, are taking part.

Pre-event, the Chrysler group executed its largest-ever direct mail drop, emailed thousands of customers and launched a microsite at chryslerpremiere.com to which all of the participating dealers linked via banner ads to promote the eight-day event. On the microsite, consumers can play a spin-and-win game that earns them a number and an entry ticket. They then take that ticket into their local dealerships and spin a real-life wheel there. If the numbers match, they are entered into the contest to win their choice of a Chrysler group vehicle, up to a $30,000 value. In addition, the brand is going to distribute 125,000 $25 gift cards to all of the people who take a test drive during the events. The Chrysler group also rolled out several purchase incentives unique to this event, including $500 in bonus cash on the 2011 Chrysler Town and Country, Dodge Grand Caravan (excluding the Express model) and Jeep Wrangler models.

“The core of this is to generate more traffic in the showrooms and to showcase our new and refreshed 2011 vehicles,” Ralph Kisiel, spokesman for the Chrysler Group, told Buzz. “The whole idea is to give people this incentive to get into the dealerships and take a test drive.”