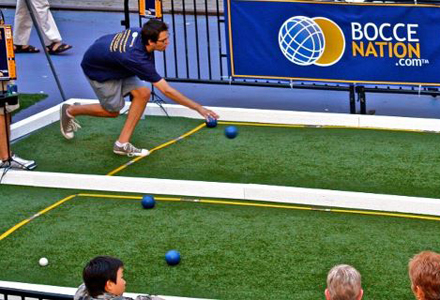 To raise awareness and drive participation, BocceNation.com from Aug. 21 to 24 in New York City’s Times Square showcased the game known as lawn bowling to the English, boules or petanque to the French and bocce to Italians. The experience took place in conjunction with the New York City International Film Festival.

More than two million people watched and 20,000 people played on one of three portable bocce courts constructed by BocceNation.com on a lush green artificial surface called ForeverLawn turf. Two courts were for regular bocce play and a third for BocceNation.com’s Target Bocce, a 10-minute game in which players rolled their ball toward a target. Those who hit the center took home a $150 Target Bocce-in-a-Bag kit.

The bocce courts provided an experiential add-on to the International Film Festival, which showed films throughout the day in Times Square. In addition, Cabot Cheese offered samples from its food truck and the New York Lottery distributed giveaways and drove traffic to local retailers who sell its lottery tickets.

“It was an amazing branding opportunity for us and exposure to the sport and our style of bocce, which has a different scoring system, is accessible to people of all ages, is portable and streamlined,” John Lehmann, president at BocceNation.com, told Buzz. “The film festival, which showed films from more than 20 countries, drew an upscale, international arts crowd in keeping with our game.”