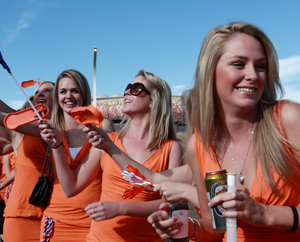 Surprise stunts and guerrilla marketing campaigns can spark a media firestorm, but sometimes it can also get you burned. In 2006, when the Cartoon Network set out to promote “Aqua Teen Hunger Force” with a 10-market ambush marketing effort, the company never could have imagined the publicity the stunt would generate. It also couldn’t have imagined the $2 million penalty it ended up paying to Boston-area authorities after placing black boards with blinking lights depicting the show’s “Mooninites” characters in high-trafficked areas. The electronic boxes were misconstrued as bombs, which sent the whole city into panic.

That same year during the FIFA World Cup in Germany, Dutch beer company and unofficial sponsor Bavaria provided Dutch fans with branded orange lederhosen to wear to the games (orange is the Dutch national color). Bavaria’s repercussions in 2006 weren’t severe. Those wearing the lederhosen may have a different opinion, though—they were punished by being forced to strip down to their underwear if they wanted to enter the stadiums.

This year Bavaria did it again, however unlike four years ago, this year’s stunt resulted in arrests. On June 14, during the Netherlands vs. Denmark match, two Dutch women were arrested for allegedly violating trademark laws after a group of 36 women turned up at the game wearing short orange dresses. FIFA—which has been fighting ambush marketers for years in order to protect the rights of its official sponsors—accused Bavaria of flying out the two women to run the ambush marketing campaign in South Africa and handing out the bright orange dresses to local women before the match, according to the UK newspaper, the Daily Telegraph. Bavaria initially denied any part in the stunt.

“Bavaria’s intention with the Dutch dresses had always been to generate pleasure and enthusiasm amongst the football fans. This was very well understood and appreciated by the international audience in and around the Soccer City stadium in Johannesburg,” Eva van den Hout, Bavaria spokesperson said in a statement released on June 16. “The Dutch Dresses didn’t have a big brand name logo. Over 200,000 orange dresses had been sold in supermarkets in the Netherlands with an eight-pack of Bavaria beer.”

On June 22, Bavaria and FIFA reached a settlement agreement wherein FIFA agreed to drop any claims, including the charges against the two arrested women, and Bavaria agreed to respect FIFA’s commercial program until the end of 2022. No worries, the attention they received this year should hold them over until then.