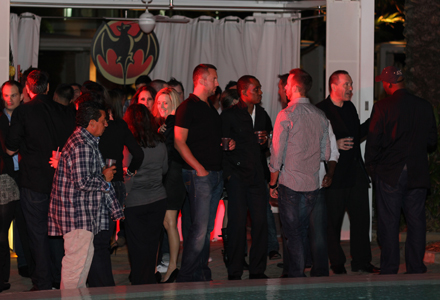 Bacardi USA this year is celebrating its 150th birthday and to kick the year off right, House of Bacardi set out to crown the best bartender in the world through its 2012 Bacardi Global Legacy Cocktail Competition. The finals were Feb. 19 and 20 in Puerto Rico, where the 26 regional winners from all over the world spent a week learning about the history of the rum, visiting the distillery in Cataño where it is made, sharing their skills and techniques with each other and learning bartending philosophies and expertise from the brand’s tastemakers.

At the local and national levels, bartenders hoping to win worked up through the ranks, competing against one another, and in Puerto Rico, the invited guests, industry tastemakers and Bacardi judges all got a chance to try and find it. Each competitor had just 10 minutes to make his or her new drink before the judges came around to make a ruling. The winner, Shingo Gokan from New York City, nearly didn’t make it, but thanks to some help on cleanup from the other competitors his new cocktail the “Speak Low” was named the best of the year. As part of the prize, Gokan will visit the Bacardi distillery in Mexico and travel to five different countries to present his drink and act as bartender brand ambassador.

“We’re looking to create the next classic cocktail that can stand with the mojito and drive the renaissance of classic cocktails,” Alberto Dias, senior brand manager at Bacardi USA, told Buzz. “For us, the goal is to build affinity for the brand with these bartenders and teach them our stories so they will tell their patrons our story and recommend Bacardi.” Agency: TEAM Enterprises, Ft. Lauderdale.