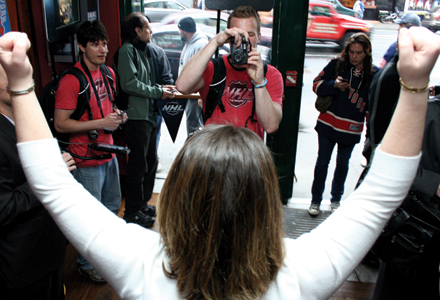 Going Beyond the Green Screen

In life, change is constant. In event marketing, the same. And though the industry certainly continues to evolve, one quest never slows: the data chase.

Marketers across the industry need data from event attendees in order to prove performance, generate leads, push digital communication and ignore post-experience communication. And they’re upgrading age-old tactics to goose their chances of getting it.

Green-screen photo activations, for example, have for years been one of the most successful triggers to get folks to give up their info in exchange for a “cool” photo. That still happens, but today’s event marketers are taking it up notch by offering more authentic photos through innovative technology, including Augmented Reality photo activations. AR overlays the virtual world on top of a real-world environment through a mobile phone or a tablet. The real-world factor is one of the reasons this technology is so appealing. And, it’s partly what made NHL Network’s Raise the Cup activation in June such a hit. Fans weren’t posing with the Stanley Cup in front of a mock green-screen backdrop. They were in sports bars with their friends.

For Courvoisier’s launch of C by Courvoisier, AR offered realism and a way to interact with a younger demographic that prefers to communicate via mobile devices. The Courvoisier team snapped consumers’ pictures using an AR app that added fun elements to the photo such as branded hats or an image of NBA star Shaquille O’Neal who partnered with the brand for the campaign. The app functioned like a green screen but without all the gear and kicked up the experience by making a virtual version of the brand’s bottle appear on consumers’ tables (Technology: GoldRun, New York City).

“The app was not only engaging and fun, but it offered a personalized, custom brand experience with the ability to share via social networks,” says Kim Washington, senior director-cognac at Beam Global, which owns Courvoisier. With green screen, a brand ambassador typically takes the consumer’s picture. But with this app the consumer has more control of the experience, which makes it much more personal. “The pass along and take-home factor is the most valuable component from a marketing perspective because it allows consumers to spread the viral message on C By Courvoisier in a very organic and authentic way,” she says. Wilton, CT-based Inspira Marketing, which handled the Courvoisier activation, has typically seen green-screen photo capture at a 20 to 25 percent share rate, but the share feature for the C by Courvoisier AR app was close to 40 percent.

NHL Network’s Raise the Cup also had high retrieval rates, says handling agency Cenergy, East Aurora, NY, which has seen a 15 to 20 percent higher retrieval rate with AR than with green screen—plus, an increase in viral sharing. “For every photo we took, fans were on average sharing that with 100 of their Facebook fans,” says John Cimperman, principal at Cenergy. “AR is a good trigger for data collection because people will work a little harder to go and get their image.” (Technology: Step Logic, Marietta, GA).

These cutting-edge photo activations also offer logistical advantages. Without all the gear that a green-screen setup entails, street teams are more nimble and can hit more places in a lot less time. The catch? Consumers need to see what their picture will look like. For the NHL program, Cenergy equipped its brand ambassadors with monitors above their heads that ran images of consumers posing with the trophy.
Inspira used iPads to show consumers the photos and also tapped into the mounted screens at the bars, clubs and restaurants where they held the events. That strategy allowed consumers to see what the photos would look like and encouraged them to participate to have their photo show up on the big screen.

The cost wasn’t all that much more than green screen, says Kim Lawton, vp-client services at Inspira, referring to Courvoisier’s program. “The cost was at parity with green screen,” she says, citing other benefits of this type of activation, such as the ability to manipulate things. “It’s just like doing an update on your iPhone. You could instantly get new images and make changes. And because the teams all have iPads already, there wasn’t an added cost. There’s no setup required and it doesn’t take up any space, so when you go into clubs, there’s an easier sell-in factor as well.”

The cost also depends on how elaborate a brand needs a program to be. Cimperman says an AR program can end up costing 20 to 30 percent more than a green-screen activation. “The bigger part of the investment is building that backend site where fans can go to retrieve their photos, learn more information about the brand and provide their data so the brand can start to build a permission-based database.” That is generally the case with green-screen activations, too. Ultimately, it depends on the brand. But Cimperman advises, “If a brand is looking to be positioned as state-of-the art, AR is the way to go.”