AT&T’s ‘It Can Wait’ Campaign Sails into Baltimore 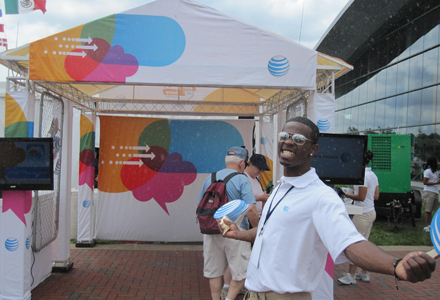 AT&T’s ‘It Can Wait’ Campaign

AT&T, a presenting sponsor of Star-Spangled 200, which commemorates the 200th anniversary of Maryland’s role in the War of 1812, used last month’s Sailabration kick-off to showcase its smartphones and tablets and raise awareness of It Can Wait, a national campaign to educate drivers about the dangers of texting and driving.

Star-Spangled 200 is the non-profit organization that supports the fundraising goals of the Maryland War of 1812 Bicentennial Commission and handles programs, events and community investment during the commemoration period, which extends until 2014. It kicked off June 13 to 19 in Baltimore’s Inner Harbor and other nearby locations with Star-Spangled Sailabration, an event that included tall ships and a Blue Angels flyover, among other ceremonies and activities

At the AT&T booth in the Sailabration Village, attendees could demo product such as the Samsung Galaxy Note and Pantech Element. They could have their photo taken with the Galaxy 2, then mailed to them on the spot. The company also distributed freebies such as chapstick and paper fans. Attendees also could register in AT&T’s Win At Home sweepstakes in partnership with the Baltimore Orioles that awards a  grand prize party for 10 people with Orioles legends, an in-home technology makeover and other prizes.

As part of its It Can Wait campaign, AT&T also set up a car and simulator that provided visitors the chance to experience firsthand how a few seconds of texting can lead to disaster, then sign a pledge not to text while driving.

“We do a lot of sponsorships where our employees live and work,” J. Michael Schweder, president-AT&T Mid-Atlantic, told Buzz. “What appealed to us is the uniqueness of the event, which is not just a week, but three years, as well as its historical and educational aspects.”