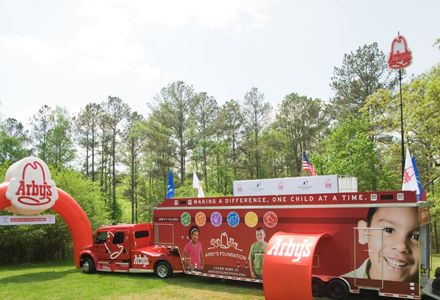 Arby’s Tours the Country to Raise Money for Charity

From April to October, the Arby’s Charity Tour visited golf tournaments and community events in 17 markets to raise money for local Big Brother Big Sisters agencies and other youth mentoring programs. The tour has been running for 13 years, but this spring it upgraded from a tour bus to a 40-foot by 80-foot trailer with a built-in replica of an Arby’s kitchen that served its signature roast beef sandwiches and Jamocha shakes. The bright red vehicle served as the backdrop for the experience, which included video games and interactions, like a touch-based photo activation mounted on the exterior of the trailer. Consumers had photos taken on site and then retrieved them on Arby’s Charity Tour Facebook page.

Two 40-inch LCD screens also mounted on the side of the vehicle allowed attendees to play Wii video games, sing karaoke or watch TV. A sky deck on the rooftop of the trailer  served as a platform for staffers to make announcements during events. The footprint also included a four-foot-tall Arby’s cowboy hat sign suspended 30 feet above the trailer. Arby’s welcomed consumers into the experience with a 25-foot inflatable branded archway, which was designed to accommodate customized signage for each stop.

To extend the experience beyond the footprint, Arby’s added a branded John Deere Gator ATV, which staffers used to transport premiums and food back and forth during the events. During golf outings, for example, there was a Snack at the Turn experience where the Gator ATV drove onto the course to gives participants food and drinks and snap their photo for its Facebook page as they were about to go on to the back nine. At the 19th hole, there was a photo reception to give out printouts of the pictures. There was also a speaker system on the Gator ATV where an iPod could be hooked up to play music, which helped Arby’s drives consumers back to the trailer.

“We wanted to bring the qualities of the Arby’s brand to life in a mobile environment, so that when people think of our core products like our roast beef sandwiches and Jamocha shakes, we make sure that those come out of the vehicle just like at our restaurants,”  Jonathan Dew, director of marketing and communications at Arby’s told Buzz, explaining that the tour’s charitable contributions are donated by Arby’s franchisees and their local suppliers that request that the trailer come to their events. National Arby’s partners like Pepsi and Proctor & Gamble also made a donation to be associated with the tour. The overall effort allowed all of the food served out of the vehicle to be free to consumers, which along with staff is provided by in-market Arby’s restaurants for an authentic experience.

Though the tour is officially over for 2010, the vehicle is still out and about, visiting the Fort Bliss army base in El Paso, Texas, for an Arby’s grand opening there next month. In December, it’s traveling to Michigan Stadium for the Big Chill, an outdoor hockey game in Ann Arbor, at the request of a local Arby’s. Agency: Turtle Transit, Lancaster, MA.