American Idol Takes the Show on the Road - Event Marketer 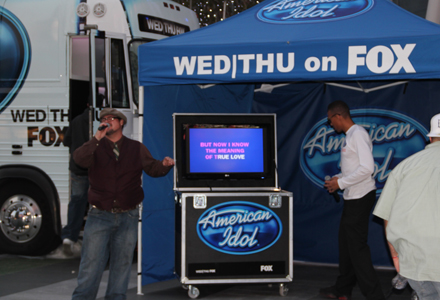 American Idol Takes the Show on the Road

To drive tune-in and generate excitement for its tenth season, FOX and “American Idol” have launched a 16-city Idol Across America tour. The tour kicked off on Jan. 19, and is traveling in a wrapped bio-diesel motor coach covered in images of this year’s judges, who include Jennifer Lopez, Steven Tyler, Randy Jackson and host Ryan Seacrest. The tour runs through Feb. 26.

Inside the bus, the space is lit with the show’s signature white and blue colors and its backlit American Idol logo. Guests are greeted by brand ambassadors who take them through a Hard Rock Café-style environment peppered with memorabilia from the show. The experience starts in a picture gallery featuring the faces of past Idol winners and features items on display including David Cook’s guitar, Ryan Seacrest’s suit, Randy Jackson’s Gucci boots and the Coca-Cola branded cups the judges drink from during the show. There are also three monitors on the walls showing an “Idol” documentary about the show’s 10 years on FOX.

In the back of the bus, fans wait for their turn, among a collection of past “Idol” winners’ platinum records, to go inside a green room where guests 15 years or older can record their version of the introduction, “This is American Idol” that Ryan Seacrest made famous. Brand ambassadors capture the action on a Flip camera and participants are entered into a nationwide contest for a chance to win a trip to Hollywood where they’ll be able to do the introduction on stage with Seacrest. Outside the bus, visitors can engage with the Idol Across America “neighborhood” where two 10-foot by 10-foot branded tents house a karaoke interaction and a photo opportunity in which fans can pose for a photo with Ryan, Steven, Jennifer and Randy at the judges’ table and then upload the photos to their social networking sites.

“The tour is a great opportunity to engage viewers and fans at the local level and really tap into that notion that every superstar begins with a dream,” Shannon Ryan, svp-publicity and corporate communications at FOX, told Buzz. “At each of the Idol Across America bus stops, we’ve invited past Idols to join us and sign autographs, perform musical numbers, and tour the bus themselves. These past Idols gave us a great opportunity to create an event with the tour in each market and secure additional local press to help drive tune-in back to the show.” Agency: Yardstick Partners, New York City.