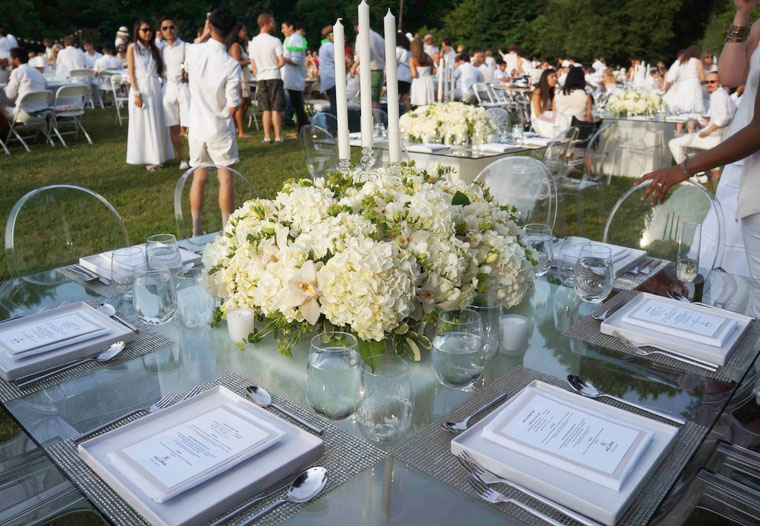 It looked like a scene straight out of “The Great Gatsby,” but with a hip-hop twist.

On June 28, more than 4,000 New Yorkers descended on Brooklyn’s Prospect Park for The PopUp Dinner Brooklyn, a one-night event in a series of four pop-up events presented this year by Acura. The PopUp Dinners are the love child of Hand Made Events, a company that started in 2011 in Northern California with a small pop-up dinner for 3,500, and has since taken off with dinners in several major cities across the country. The idea is a fresh take on a French tradition called Dîner en Blanc, literal translation: dinner in white.

What makes Hand Made Events’ PopUp dinners so unique is the word-of-mouth driven format. Hand Made selects the city, the location and provides the tables and chairs. But the rest is entirely community-driven and crowdsourced. Attendees are encouraged to gather a group of friends, plan an elaborate meal and an even more elaborate tablescape (candelabras, formal china, feathers and sequins are encouraged, although electricity is not provided), and then bring it all to the location, which is kept top-secret until three hours before the event.

GALLERY: Check Out More Photos from the Event

Attendees typically learn of the event through social media or word-of-mouth. Brooklyn’s dinner was promoted solely through a press release and an offer on Gilt.com for $28 tickets (tickets sold out in four hours). The events begin at 5:00 for table decorating, 7:00 for dinner and performances and dancing at 8:00 (this part of the program varies by city). Brooklyn’s event was a fundraiser for the Prospect Park Alliance that raised over $40,000.

Despite the wide range of age groups and demographics that attend the pop-ups, Acura says the consumer base is right on target. “In the last year or so we’ve clarified our Acura target as a group we call the ‘enlightened.’ We shifted away from pure demographic targeting and towards a mindset,” says Acura manager national advertising Gary Robinson. “The ‘enlightened’ value special experiences. Their idea of luxury is what they can do and what they can experience as opposed to getting the maximum number of possessions and showing off.”

Event Marketer was invited to grab a seat at the VIP table at the Brooklyn PopUp Dinner, and we share our complete report on the event and Acura’s activation here. Be sure to read on for insights from our interview with Robinson, who explains how and why a major automotive brand found a kindred spirit in a platform that was initially reluctant to include a corporate presence at its events. And why having no guarantees that anyone would show up was just fine with the brand.

At 2:00 p.m., the word was out: Prospect Park’s Peninsula would be the location of the PopUp Dinner Presented by Acura. Simple signs on signposts pointed the way as thousands of New Yorkers hopped out of cabs and emerged from subway tunnels dressed in white and carrying bags, coolers and wicker picnic baskets filled with food, flowers and tabletop décor.

Once guests arrived at the entrance to the event, they were greeted by a group of 10 Acura brand ambassadors who offered to help transport their picnic spreads on Acura-branded rolling carts. Most attendees filled in around the stage first—Ben Folds was the featured entertainer for the evening, courtesy of Acura—and by 7:00, nearly every seat was filled and every tabletop was spilling over with flowers, feathers, food, wine and champagne. Attendees took note of the dress code and came dressed in their own take on what “white” meant to them. Women mixed ethereal vintage dresses and flowers in their hair with pretty braids, parasols and pearls, and then topped off the look with a pair of white Chuck Taylors. Some even added a Southern hoop skirt to their ensembles. Gentleman wore seersucker suits, bowties and bespoke hats.

“In the last year or so we’ve clarified our Acura target as a group we call the ‘enlightened.’ We shifted away from pure demographic targeting and towards a mindset,” says Gary Robinson, Acura manager national advertising

Four long strands of white lights hung from each corner of the park to a central stage where a white grand piano gleamed under the spotlights. The park’s lake changed colors as the sun set nearby and created a bucolic backdrop for photos. The thousands of picnickers sipped wine and dined on their lavish spreads of food along family-style tables while 32 of us dined in the Acura VIP section at smaller, square tables decked out with tall candelabras and white hydrangeas. Each VIP guest—mostly select lifestyle and luxury media Acura says it doesn’t often have a chance to connect with because of its hyper-focus on automotive press—had a customized menu and enjoyed full table service. And each went home with a box of four Govino wine glasses etched with the Acura logo. Guests who showed staffers their Acura key fobs on the way in also scored a box of glasses, too.

During dinner, long (and we mean, long) lines formed for a single freestanding photo booth that offered a printed photo on the spot and a kiosk interactive for social sharing. Ben Folds took a seat behind the Acura-branded grand piano at around 8:00 and drew crowds to the stage to sing along with him. Dancing kicked off just after the performance, and as the crowds left the park, they could grab a handful of candy from an all-white candy bar filled with white gummy bears, gumballs, rock sugar sticks and other tasty treats–and grab a glance at the new Acura TLX while they were at it (Allied Experiential, New York City, and Mullen, Boston, handled).

Acura hosted another PopUp Dinner in Los Angeles on Aug. 23 and is hosting two more events: Miami in November and, in true PopUp fashion, a third event in, you guessed it, a surprise location. 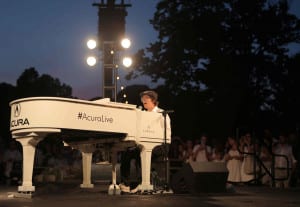 PLAYING IT COOL: Five Tips for Creating a Partnership with an Up-and-Coming Platform

Hand Made Events had been approached several times before by major brands wanting a piece of the excitement that its chic and popular events were generating. But it had been reluctant to sign anyone on, according to Acura, which had happened upon the event series when one of its p.r. staffers attended an event in Los Angeles.

“These events are special and to put up corporate signs would ruin the vibe of the event and put them out of business,” say Robinson. So the Acura team decided to tread lightly and see if they could find a way to be part of the events without coming off too corporate. The key, it discovered, would be through finding ways to add to an already memorable experience.

“We think that in order to be an effective partner with an event you have to bring an experience to somebody that you are somehow enhancing,” says Robinson. “Maybe we can kick in more money and have Ben Folds be the artist instead of a local band. Maybe we can add a photo booth and pay for it. The idea was that anything we did there was intended to add to the experience in some way.”

Here, Robinson outlines five more tips for forging an activation-based partnership with a platform that lives and dies by its authenticity.

1. Keep it Casual. Acura kicked off its outreach to Hand Made Events with an email. No elaborate proposals or heavy-handed sales approach. Just a casual email to see if they were open to the conversation.

2. Meet on Common Ground. Hand Made Events has never been to Acura headquarters, and probably never will, says Robinson. Both groups had their initial meetings in an outdoor restaurant, in keeping with the popup dinner theme. “We kind of met them on their terms,” says Robinson. “And made it into a personal relationship rather than a corporate thing.”

3. Skip the Proposal. “An event like this that comes from an authentic place in terms of its origins, there’s some sort of passion that the people who created it have that makes it special,” says Robinson. “If we as a corporation came into it with a proposal or had them come to corporate headquarters, there’s a lot of that that would have been a real turn off.”

4. Be a Good Listener. “We basically listened and heard what they were all about, and shared what we’re about and looked for those places where there’s commonality, versus coming in with a proposal,” Robinson says.

5. Handle it Yourself. This is not a relationship you farm out to a vendor or agency partner, Robinson says. “It makes it a little bit more labor intensive, but once the ball is rolling, it worked pretty smoothly.”