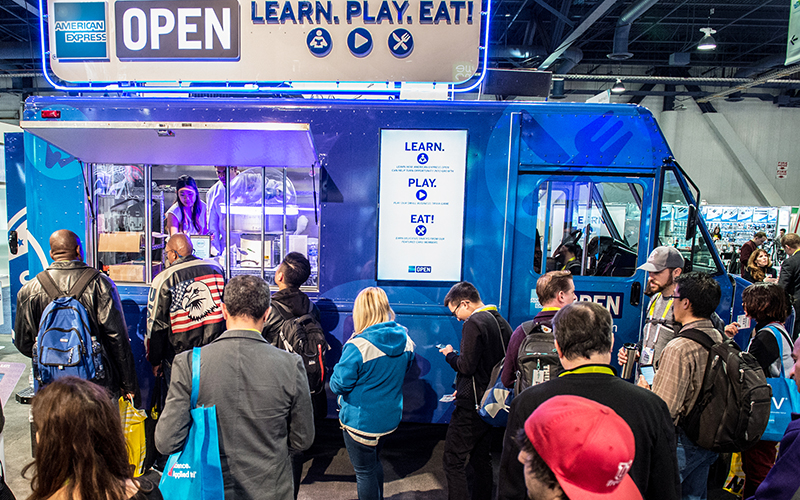 There was more going on at the American Express OPEN booth at CES than met the eye. Sure, attendees could step up to one of the iPad kiosks and take a trivia quiz to get a treat from the American Express OPEN food truck, which was stocked with goodies made by two of its cardmembers, and a chance to win a $100 American Express gift card. But the brand’s Learn, Play, Eat activation was actually a lead-generation tool that drove qualified traffic to its booth and engaged 2,800 attendees over the course of four days.

Following are some insights shared by Juliana Yoon, manager-trade shows at American Express OPEN, that can benefit any brand hoping to make lead acquisition a key part of their trade show strategy.

American Express OPEN’s booth could have had attendees scratching their heads as to why it was there. After all, unlike Samsung, Toshiba, Microsoft and most of the other exhibitors, it’s not a brand endemic to the consumer electronics industry. So its 50- foot by 60-foot space, located on the upper south hall of the convention center, had to make its mission—that it exists to serve the business needs of small business owners—clear from the outset. “We had to make sure our presence was interactive, that quickly connected why we were there. Everything we did was consistent, from what we gave out to the messaging, which was we are here for small businesses—those that are already with us and those who want to learn more, and here is an example of how we support our cardmembers,” Yoon says. 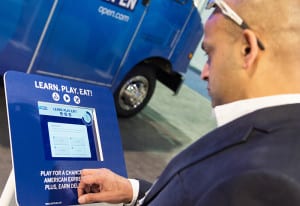 Those who stopped by the American Express OPEN booth at CES could step up to one of the iPad kiosks and take a trivia quiz to get a treat from the brand’s on-site food truck.

Surrounded by the glitz of CES’s high-tech exhibitors, American Express OPEN’s simple concept—play our game and win a prize—resonated with the small business owners it was targeting. Attendees stepped into the space, took a 90-second trivia quiz with questions about small business and CES, then depending on whether they were small business owners or not, received a color-coded voucher to receive their prize and possible follow-up with one of the on-site business consultants.

“Simple and easy at a trade show is key, so the average attendee is not afraid to step in and ask what is going on. The food truck really helped with that,” Yoon says.

Trade show attendees are a hungry bunch, so American Express OPEN lured them in during the first two days with the smells of cotton candy, hand-spun to order by Spin Spun, one of its cardmembers. On the second day, artisanal popcorn flavors from Pipcorn, another cardmember, did the trick. “The idea of being able to have food at a show that is predominantly product driven was different and made it successful,” Yoon says. “You could actually smell the cotton candy as you walked down the aisle.” Ahh, we can smell it now (Agencies: FreemanXP, Chicago; Momentum Worldwide, NYC, creative)