Toyota Takes its Dealers on an Emotional Journey - Event Marketer 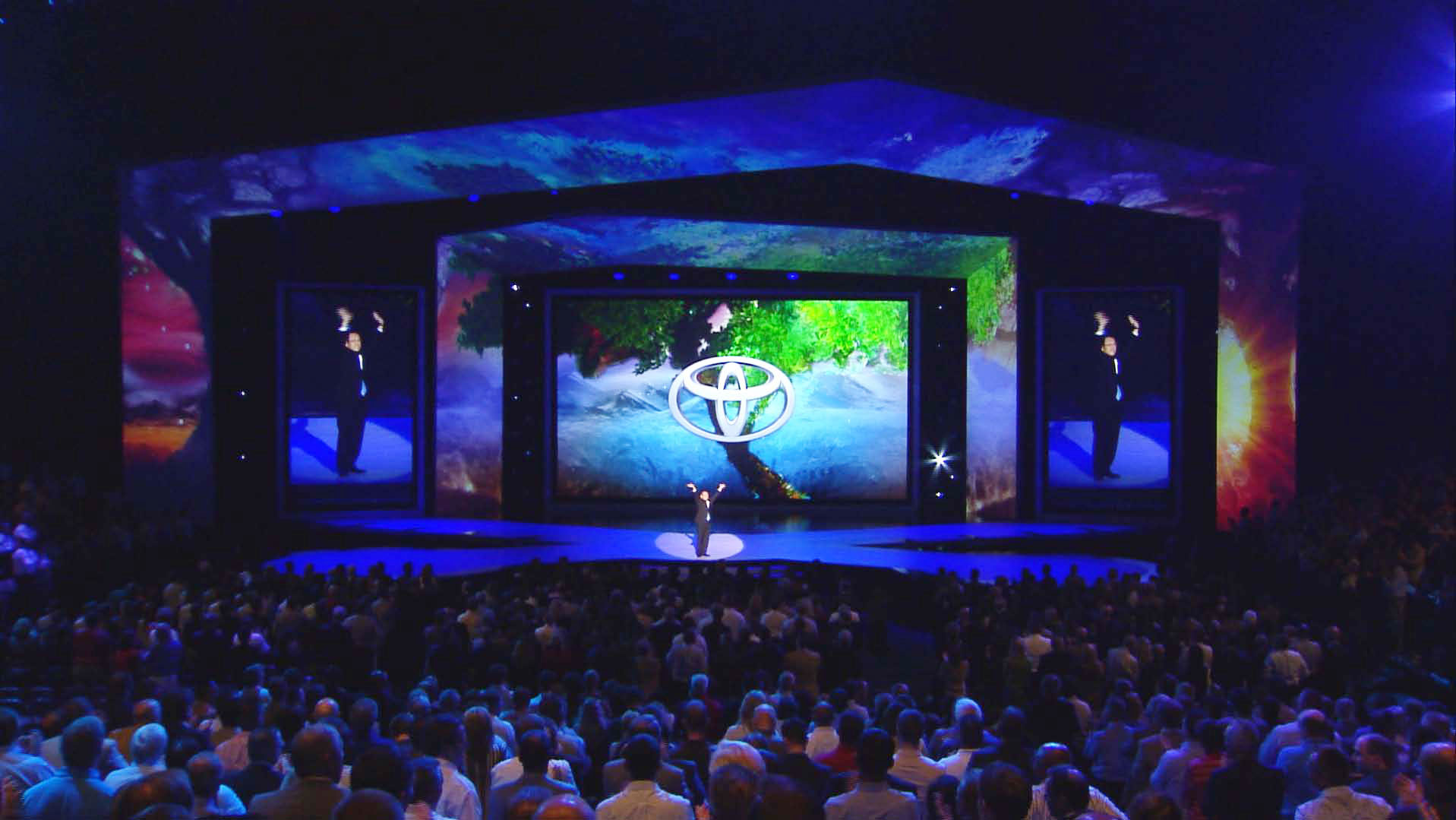 Toyota Takes its Dealers on an Emotional Journey

At the close of the business portion of Toyota Motor Sales’ annual national dealer meeting in Las Vegas last fall, one dealer, or “partner” as the brand calls them, walked up to Bob Carter, svp-automotive operations for the car manufacturer’s U.S. unit, to offer a little feedback.

“He was a big guy… 250 pounds, probably six-foot-five, solid muscle, a great guy… and he said, ‘I’ve been going to manufacturer shows for years and I never shed a tear, but you had me crying four times during that show,’” Carter recalls. “Everybody has a little different way of describing it, but I refer to it as being on an emotional rollercoaster—and that’s where we started the show.”

The three years prior to that exchange had been pretty rough on the Toyota brand, from the economic crisis and meltdown of the automotive industry to high-profile recalls to the devastating earthquake and tsunami in Japan, an event that disrupted the brand’s supply chain. But by that meeting things were smoothing out; they were looking up—the economy, sales for that month and sales for the year.
Toyota’s dealer meetings have always been known for their high production value, but this meeting shined a light on a critical ingredient to making a connection with the audience: tone. As it gathered roughly 5,000 of its U.S. dealers, business partners and spouses together in one room at the Mandalay Bay Resort and Casino, Toyota wanted to carefully balance the news of its success with an appropriate nod to the struggles its dealers had faced. What resulted was quite the ride.

The meetings are typically scheduled about a month before new products start arriving at dealerships and this particular one happened to fall on Sept. 11. Rather than ignore the importance of the day, the brand opened the business portion with an original documentary that featured interviews with key people behind the rebuilding of the World Trade Center in lower Manhattan. The film drew a loose correlation to Toyota’s own process of rebuilding and moving forward.

A series of meaningful tributes followed and contributed to the sense of company culture. For example, two dealers were recognized for their contributions to an orphanage and school for children with autism, respectively. The brand also honored a retiring executive, a former marine, by inviting a Marine Medal of Honor recipient to the presentation of an endowment for a scholarship fund created in the executive’s name.

“A lot of our success in the last couple of years has really been taking [Kaleidoscope’s] advice relative to building some emotion and relevant tone into the meeting so that it’s not just a lot of strategy, products and tactics,” says Bill Fay, group vp, gm, Toyota Division, Toyota Motor Sales. “When the dealers left they were really feeling good, even in looking back at the last couple of years when maybe the overall environment we were operating in wasn’t that good.”

For the first time, the brand used 3D projection mapping technology to provide poignant visual support during the reveal show and the business portion, in particular, the keynotes. During Akio Toyoda’s speech, the worldwide ceo of Toyota and grandson of the founder drew an analogy to the growth of a tree. As he spoke and lifted his arms a tree appeared to grow behind him and up toward the audience—an effect enhanced by music (Projection: Moment Factory, Montreal).

Singer Michael Bublé transitioned the meeting into the reveal show, performing alongside a full bandstand in three segments. Sofía Vergara of ABC’s “Modern Family” served as host. The brand introduced new vehicles using short films—the first, for the Avalon, starred A-list actors Julianna Margulies and Josh Lucas, and the second, for the Rav4, starred young professional surfer Brett Simpson. At the close of the show Toyota executives surprised Bublé and Vergara with new Avalons, a spontaneous gift not always guaranteed to the high-profile guests invited each year.

Year-long Investment
Since many dealers are multi-franchised, these meetings are inherently competitive. It just so happened that in Sin City on the same weekend as Toyota’s meeting, General Motors and Ford were holding their meetings. Chrysler’s meeting was a few days later. Dealers may compare meeting styles and, sometimes, they may be forced to choose which one to attend.

“We always do the gut check to make sure we’re speaking to and from the perspective of the participant,” Carter says. “That is our one opportunity each year when we get everybody together in one room and we pound the stakes in the ground and say, ‘Here we are, this is what we represent and this is where we’re going.’ There’s a power to that.”

For Toyota, the annual dealer meeting is a key jumping-off point for the year. “This is certainly not a one-and-done show that we do this day and then we shut it down,” Carter says. “It is about communication throughout the year and referring back to that show.”

After the meeting, Toyota prepares DVDs of the highlights and distributes them for use in internal dealership sales meetings. The brand then surveys attendees to gather information on how clear the brand messaging spread and how well it was presented during the meeting. While the brand tends to score high among attendees, there usually is a little criticism, overall. Not this past year. Forty-seven percent of attendees returned the 2012 meeting survey and the results showed a 100 percent approval rating.