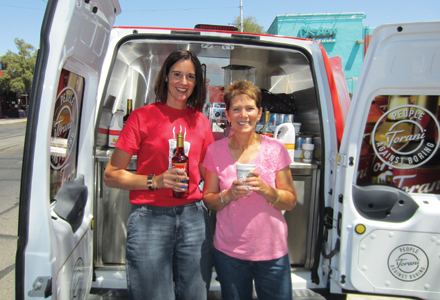 It isn’t often that a b-to-b tour gives rise to one that connects with consumers, too. As a matter of fact, it’s quite unusual, says Julie Garlikov, vp-marketing at Torani, the Italian coffee syrup brand. But that’s exactly what happened last year when Torani took to the road with its bottles, cups and blenders, hitting independent coffee houses along the West Coast that use the syrup in their coffees and a few of the distributors who service the accounts. This year it is taking the b-to-b tour to the East Coast and, for the first time, will activate a tour that brings its syrups directly to consumers who can pour a sample into their coffee themselves and even purchase a bottle or two.

“We were looking for something different, a big idea to try versus the trade advertising we had done for 20 years to reach that consumer,” Garlikov says. So, she first had her team read David Meerman Scott’s The New Rules of Marketing and PR, which she says describes how marketing is being turned on its head and how things are different in today’s world. “I felt like we had been doing the same thing, and spending the same amount of money, and it was very hard to see the return. We were depending on trade advertising as the only way outside of our sales team to touch distributors and reach the coffee shop operator.”

Torani didn’t stop trade advertising altogether, but targeted it specifically for product launches. It put most of its resources into a four-month mobile tour that took a truck and driver along the West Coast, stopping at six to eight coffee houses a day for a total of more than 500 stops over the summer, from Portland and Seattle to Phoenix and San Diego, sticking relatively close to the San Francisco-based company’s roots where it enjoys its strongest market.

“It was a model of engagement that worked really well,” Garlikov says. So, this year the b-to-b tour will travel to coffee houses on the East Coast, from Washington, D.C. and Baltimore to New York and New Jersey. This time around the company will involve more distributors who will ride with the tour and engage with its coffee house accounts as it samples its syrups, smoothies and flavored Red Bull infusions. But, in an interesting twist, this growing b-to-b tour has spawned a b-to-c tour as well to reach consumers who buy its products at Walmart and grocery stores such as Kroger and Winn Dixie (Kicking Cow, St. Louis, handles both tours; Gensler, San Francisco, handled design for the b-to-c tour).

Torani last year tested consumer outreach at four grocery stores to determine which tactics—display, in-store demos, couponing or email blasts—would drive the most sales for the brand and how much it would cost to invest in consumer programs. “One of the highest returns was event marketing because the product is something you really need to test and play with, and once you test and play with and taste it, you love it,” Garlikov says. “But you don’t necessarily get it just seeing an ad.”

The brand set up tables at local events and festivals within a five-mile radius of the grocery stores. Chalkboards and staffers dressed in barista-style aprons added to the ambiance. Attendees could make their sample, play with the product, get a coupon and buy a bottle of the syrup, making the experience more like a mobile pop-up store than a mere sampling event.

“People want immediacy in today’s world,” Garlikov says. “If you go somewhere and have an amazing experience, you don’t want to have to go home and go online to buy it, or go to the market. If you want to buy it, you should be able to. I want to make it as easy as possible for people.”

So, this year, Torani will hit the road from Memorial Day through the summer with a b-to-c tour focused on the western U.S. While it is still in planning stages, the effort will most likely involve a 20-foot truck with a lit-up bar in the back staffed by eight to 10 people where attendees can make a sample drink or purchase a finished drink and bottles of the syrup. It will also house iPads for people who prefer to buy online. The tour will kick off at the 75th anniversary celebration for San Francisco’s Golden Gate Bridge, then travel on weekends to the Portland Rose Festival, the San Diego County Fair and other events, making smaller stops during the week.

Success metrics will track a number of variables—how many fans like the brand on Facebook, how many enter the sweepstakes, how much revenue the tour achieves and online sales.

And of course, how much of a “buzz” it inspires.