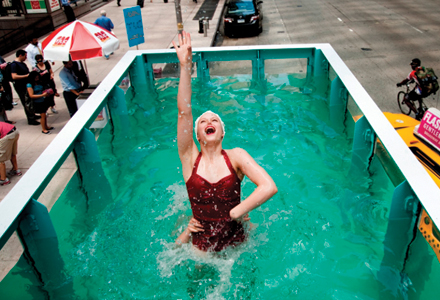 TLC, Lifetime and Sensodyne Get Glassy-Eyed

A box truck’s a box truck, no matter how you dress it up, unless of course the truck is a dental clinic or beauty salon, or even a swimming pool. This spring, brands like Lifetime Network, Sensodyne and TLC ditched the flashy graphic wraps and instead hit the streets with custom-designed glass-enclosed mobile vehicles.

As part of its summer tune-in strategy, TLC targeted New Yorkers on May 25 with a live stunt that featured a glass box truck filled with 7,200 gallons of water parked on a busy block of Sixth Avenue. The pool on wheels reinforced the network’s promotional commercials and featured a team of synchronized swimmers who drew in crowds and created fun figures in the water with equal facility. When the swimmers took breaks, a SCUBA diver went under water to hold up humorous signs and invite passersby and onlookers to take home promotional flip-flops and, of course, remember to tune in. (Agency: LeadDog Marketing Group, New York City.)

Though glass-sided trucks can indeed bring big buzz to those that use them, they also bring unique challenges. During construction, TLC’s primary concern was to make sure the glass box could hold the water pressure safely, and that it would fill and empty in a timely manner (it took about two hours for each process). Another hurdle was that it is illegal to drive with the truck filled, so the “mobile” pool, once parked, ultimately became stationary. But that was no game-ender for TLC. Though it didn’t move during the event, the word of mouth certainly traveled fast, drawing thousands of watchers to Sixth Avenue during its one-day stay.

“This execution was the only option for our creative,” says Rose Stark, marketing director at TLC. “TLC is about extraordinary people doing extraordinary things and this vehicle tied in with our larger campaign and network promos.” Graphics ran along the bottom of the pool to reinforce the brand’s message but didn’t block the view of the swimmers inside (LeadDog handled.)

On June 4, Lifetime Network hit three locations in New York City with its “Makeovers on the Move” tour—a glass box truck outfitted with makeover stations that provided free “diva” experiences including manicures, massages and a mini photo shoot for women (and some men) throughout the city. The tour promoted the June 6 premiere of the second season of the network’s “Drop Dead Diva” series.

Traffic flow was a key consideration for Lifetime, since the truck was only 18 feet long, so brand ambassadors ushered attendees through the area, and kept them busy with other activities as they waited for their turns. The transparent walls helped too, giving those waiting in line a clear view of the pampering experiences they were about to enjoy.

“This was a perfect opportunity to fully embrace the feel of the show,” says Alex Ignon, vp-media and consumer promotions at Lifetime. “During the makeovers the clear sides of the truck drove viewer engagement and allowed us to meet one of our key objectives, driving word of mouth about the show’s second season premiere.”
Dueling objectives drove Sensodyne to use a glass-sided truck for its mobile Dental Health Spa, which hits 11 fairs and festivals over 23 weeks this summer. The vehicle had to be transparent enough to pique the curiosity of those passing by, but opaque enough to preserve the privacy of those inside. (Agency: Mosaic XM, Chicago.)

To accomplish both goals, the brand retrofit a gooseneck trailer with several four-and-a-half-foot square windows made of tinted, tempered glass. The windows let enough light through so that passersby will be intrigued, but not enough to embarrass the folks sitting with the hygienists inside, getting consultations and trying out Sensodyne’s products. EM