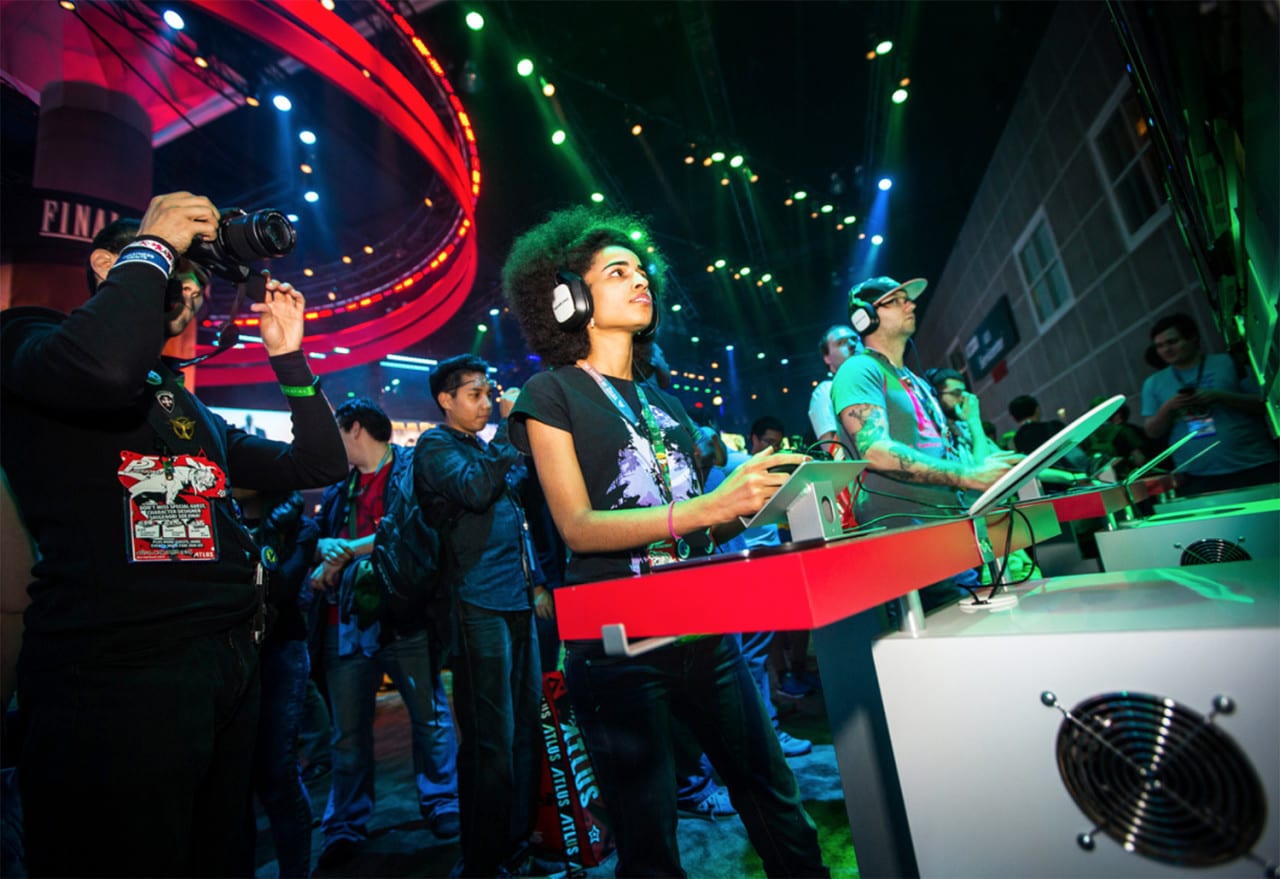 How Square Enix Stood Out (By Staying in) at E3

Among the sea of booths at E3 2016, the Electronic Entertainment Expo that took place June 14-16 in Los Angeles, one exhibit stood out for its open format and immersive experiences: Square Enix. The Japanese-based global publisher and developer of entertainment and video games showcased its broad range of titles under the Square Enix umbrella while shining a light on two of its newest games—Final Fantasy XV and Deus Ex: Mankind Divided. A live streaming broadcast booth, which posted a 33 percent increase in viewership over last year, an open video theater, areas for both open game play and structured game play experiences and a live presentation theater with rotating demos and surprise guests engaged attendees and resulted in a packed booth for the brand over the course of the three-day trade show.

“Several of the larger publishers moved to an outside activation or decided not to show on the show floor, and a lot of the booths that were there had walls up, and you had to navigate through the booth to see everything. But at our booth, you could walk up and see everything you could do in one shot, all the different titles, and say, ‘Okay, I want to play that, that and that, and then I want to move on to that.’ You knew exactly what you wanted to do at any time,” says Wil Lin, director of events at Square Enix.

Just how did Square Enix wrap its diverse content into one unified brand experience? Follow along as we walk you through the 15,000 square-foot space.

The first thing to strike attendees was a serpentine banner above the booth made up of eight-foot by eight-foot frames with high-resolution graphics that presented the line-up of 20-plus individual titles in the Square Enix lineup. “Immediately you got a sense of the diversity and breadth of the titles because each one has a different look and feel, but also the connectedness of it all in this serpentine form as it swept through the space. It was the defining design feature of the booth,” says Daniel Pinkham, president of Kenwood Experiences, which created the exhibit. From there, it was all about the engagements.

Strong visuals and a focused activation for Final Fantasy XV clued attendees immediately to the fact that this was a big introduction. As they walked further into the booth, attendees saw the archway for the Deus Ex environment, which featured engagements for the main game, a side game and a mobile game, all part of the franchise. Also on display—a prosthetic arm developed in partnership with robotics company Open Bionics that was inspired by the game’s protagonist. “Attendees immediately felt that these were the two strong titles we were trying to promote,” Lin says. They also got to try their hand at 10 to 15 minutes of structured game play with the new titles under the tutelage of brand ambassadors who helped orient the players and guide them through the experience.

E3 is all about lots of game play, and there were as many as 90 kiosks, all lit and branded in Square Enix style within the booth where players could try their hand at more than 15 additional game titles, from role playing games to first-person shooters, mobile gaming and more. “We had a breadth of those products out on the show floor,” Lin says.

A large open video theater that resembled an outdoor movie theater with bench seating and a high-definition LED wall ran trailers for more than 20 of the video games featured in the booth, all packaged and presented to get the message across that they were part of a collection under the Square Enix banner.

Attendees gathered to hear presentations on the games as producers and developers took them through a tour of the titles. An overhead digital marquee changed along with each speaker and informed attendees of upcoming speakers.

The Square Enix Presents broadcast booth, in a fishbowl set-up, let attendees in on the video streaming action that fed content directly to consumers for six hours each day of E3. They could see the studio live, hear the presentations and view camera feeds going out to consumers who tuned in remotely. The live stream is archived so users can view it later. Agency: Kenwood Experiences, San Francisco.