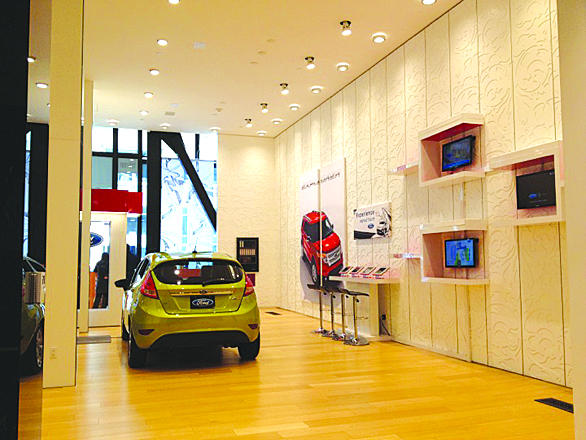 The “hyper-local” catchphrase is almost cliché these days, mostly because every time event marketers get together, they discuss how consumers want “authentic,” “endemic” experiences that “speak to them.” Of course, many of those same people (they’re such “360-degree marketers,” who think “outside the box,” and they’re trying to “create tribes” of influencers who “fuse” with a brand) will go out and design a tour that will hit 35 different markets all over the continent, and each stop and activation will have been precisely engineered to be identical and each consumer experience consistently the same.

Hardly authentic. Which is why a growing number of brands are invading less markets, and in many cases, one market at a time—to test programs, to go big in fewer markets, to own a specific singular city. They’re doing so by creating executions that are unique to each market, and frequently only doing them once, in the one market that best represents the target consumers to whom they want to talk. Keep going, dear readers, and find out how some of the best in the business are keeping it real, for real.

Clear Sailing
Claritin Canada, a division of Merck, for a week in May took over Toronto’s streets with the Pedal for a Greener City campaign. The month-long initiative offered free EcoCab rides to residents and invited them to help create a greener city by voting for one of three potential urban green projects proposed for Evergreen Brick Works, a community environmental center in the heart of the city.

Throughout the promotion, Torontonians voted for one of three projects by taking a free ride on one of the 12 EcoCabs sponsored by Claritin. Each of the pedal-powered cabs, which were hand-painted by local artists, was equipped with an iPad linked to the brand’s Facebook page where the riders voted for their favorite project.

“We wanted to choose a market where we would actually be able to implement a physical and visible change to a green space. We also wanted to be able to fulfill our promise to consumers and implement that greener change in the same year as the Pedal for a Greener City program,” says Melissa Ferlaino, associate product manager on allergy at Claritin. “When we heard about Evergreen and the Brickworks site in Toronto not only was this a great opportunity to contribute to ‘greening’ the city of Toronto but it was a site where we could implement the project in 2012.”

“In California, FiOS isn’t available everywhere, so TV spots won’t work because so many people won’t qualify for the product,” says Kim Cochran, director-marketing at Verizon FiOS California. “We had to grow awareness, and traditional tactics didn’t make sense, so we needed to be surgical about hitting only the areas that have access.”

Going Further
Ford this spring began a series of pop-ups in San Francisco, where the brand currently has no formal dealership, to reconnect with consumers and remind them that the brand is still hot, and on the forefront of technology, sustainability and performance. The first in the series of four “Go Further” spaces opened in April, and the next opened in June. Each remained open for a month and during that time took over a storefront in a neighborhood important to a key demographic for the brand. Ford is exploring the possibility of expanding the program to other U.S. markets, depending on results.

The first pop-up was a gallery space with local artists and a showcase dedicated to some of the new Fords. The second was all about sustainability and linked to the new Escape SUV, which is built using more post-consumer recyclable materials than other vehicles. The third featured active lifestyles and the final pop-up is still a secret.

“The Go Further pop-ups are designed to make sure people in the market are cognizant of our brand and our newest product offerings,” says Travis Calhoun, marketing development manager-Ford West Coast market area. “This is an opportunity to bring the blue oval to a consumer that might not know about us otherwise.” Handled by: RMD Group, Bellflower, CA.

Mail It In
As part of a strategy to reinforce its “ION Delivers” campaign, ION erected a pop-up mobile mailroom during TV’s Upfront Week 2012 in New York City on streets outside of advertising agency offices. The effort (April 30 to May 4 and May 7 to 11) reinforced the premise that ION delivers on four key sales points. The campaign was designed to encourage buyers to spend money with the network and drive traffic to its website. The mailroom was situated on the street in front of each agency, making the delivery as convenient and seamless as possible for buyers.

“What we’ve found in the past few years is that our agencies and buyers are so busy that we make it a rule to make it easy for them and go to where they are,” says Chris Addeo, vp-marketing at ION. “This is our fourth or fifth campaign that targets specific agencies, down to activating at their front doors.”

At the “mailrooms,” the buyers received a cold ION-branded water bottle, interacted with the iondelivers.com site via iPads, then exchanged their shipping notice for a box of branded desktop items. “We have found the one-on-one experience with buyers at key agencies is effective and gives our sales people a chance to interact during a time when the buyers are very busy,” says Addeo. Handled by: The Michael Alan Group, New York City.

Go Dutch
To celebrate Queen’s Day, a Dutch national holiday in April, beer brand Grolsch in Miami partnered with local bike group The Miami Bike Scene, the Grand Central Park non-profit organization, and the Dutch Consulate to turn the monthly Miami Critical Mass bike ride into the Go Dutch! bike ride on April 27. The ride wound through the city and ended at Miami’s Grand Central Park with an orange-festooned festival to celebrate the beer and the holiday.

“We were looking to increase brand consideration and awareness about the beer’s Dutch heritage,” says Ethan Ganot, associate brand manager for Grolsch at MillerCoors. “We really wanted to make it about what Queen’s Day stands for with the Dutch people and the biking scene is very important to the Dutch people”

The festival included large tents for four restaurants, which sold Dutch-inspired food, and two bar tents where Grolsch was the exclusive beer and attendees could try the exclusive drink, the “Double Dutch,” a Grolsch with a shot of Dutch gin. Music pumped from a  vehicle manned by Dutch djs and guests caught a screening of a movie created for the event with clips of Queen’s Day in Holland, images of previous Critical Mass bike-rides and the latest Dutch Grolsch commercial. Handled by: Team Enterprises, Ft. Lauderdale, FL.