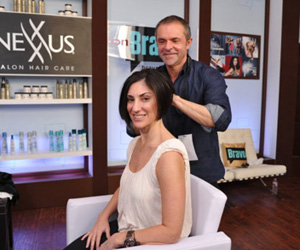 Bravo’s series “Shear Genius” at the 2010 Sundance Film Festival presented a Shear Genius salon where celebrity stylists created hairstyles for A-listers and provided fans an inside peek at the show. The salon featured hair care products from Nexxus, which sponsors the series. Jonathan Antin, one of the judges on the show, and Nexxus creative director Kevin Mancuso styled the celebrity looks. The salon also partnered with Locks of Love, a public non-profit organization that provides hairpieces to disadvantaged children suffering from long-term medical hair loss.

The salon is part of an integrated marketing program that includes a Nexxus-sponsored sweepstakes with a weekly chance of winning $500 for a hair makeover and a grand prize of $10,000. Fans can submit photos of their own hair creations to win weekly prizes and vote in a “Rate The Do” interactive photo gallery to weigh in on looks from each episode of the show.

At Sundance, fans visited the salon and met the stylists as episodes of the show aired on flat-screen TVs hung on back-lit walls that gave the space a warm but professional feel. “It gave them the experience of what it would be like to be in the hot-seat of a ‘Shear Genius’ salon,” Ellen Stone, svp-marketing at Bravo, told Buzz. “It is a strategy of Bravo to really bring what is on TV into their everyday lives and create new touch points for them, so they can become more involved with the shows. Agency: Precision Event Group, Beverly Hills, CA.