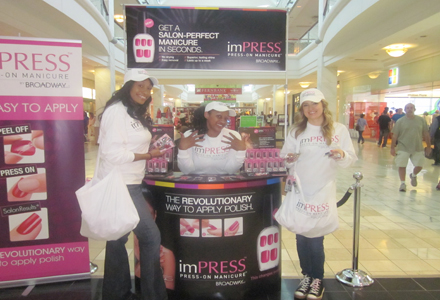 Broadway Nails Sets Out To ‘imPRESS’

Broadway Nails is activating the second phase of a two-pronged tour on the streets and in malls with an expanded sampling campaign to promote its imPRESS press-on manicure sets among young women ages 15 to 25. Broadway Nails, a subsidiary of Long Island-based Kiss Nails, sells the product in chain drug stores and discount retailers, such as Walgreens and Walmart.

The first sampling effort took place last December in four markets—Dallas, Miami, New York City and San Francisco. This phase, which runs March 16 to June 24, will hit nine additional markets. The campaign is a two-pronged effort. Street teams wearing branded gear and overhead “thought bubbles” that state “Manicure in Minutes” distribute imPRESS sample packs that include a product brochure and coupon at high-traffic locations, concerts, parades, college campuses and street festivals. Mall teams pass out the sample packs at pop-up kiosks with overhead signage. The goal of both teams is to get the imPRESS press-on nails onto one of the consumers’ fingertips.

“We felt it was important for the consumer to get that ‘wow’ factor when she puts the nails on, even it if it is just one nail,” Carrie Connell, senior marketing manager at Kiss Nails, told Buzz. “You can’t believe how good they look until you have them on yourself. So, that’s why it was important to have the street teams and mall kiosks where consumers could actually try them.”