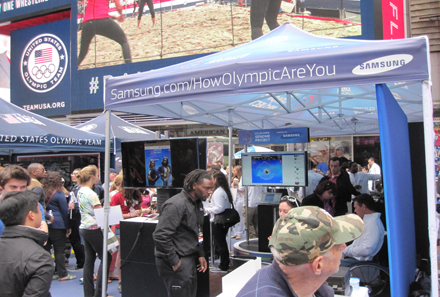 As part of the U.S. Olympic Committee’s Road to London celebration, which was presented by Hilton HHonors and took place in New York City’s Times Square on April 18, Olympic sponsors including Samsung, Hilton HHonors and Chobani engaged fans in interactive experiences to promote the games and the athletes. The day marked the 100-day countdown to the opening ceremony of the 2012 Summer Olympic Games and transformed Times Square into an Olympic Village with sports demos, giveaways, autograph sessions and a touch of London.

Samsung, the official wireless telecommunications equipment partner of the USOC, demoed its U.S. Olympic Genome Project, a Facebook app in which users can discover their connections to Olympic and Paralympic athletes. Samsung first unveiled the app in beta form at SXSWi.

Fans can discover their connections to the athletes and the Olympic movement by logging onto Samsung.com/HowOlympicAreYou and using their Facebook profile to connect to the Genome Project. Once they “like” the project, they can share connections with their Facebook friends, take quizzes to raise their member status, learn about athletes and follow Team USA news.

Ralph Santana, svp and cmo for Samsung N.A., who was on hand at the event, told Buzz, “People want to know how they are connected to the Olympic movement but don’t necessarily know how. We have created a Facebook experience that literally maps out like a family tree how people are connected.”

The app also helps drive awareness for Samsung. “It gives people more of a connection and an affiliation a little more endearment toward the brand,” he said. Agency: Team Epic, Smyrna, GA