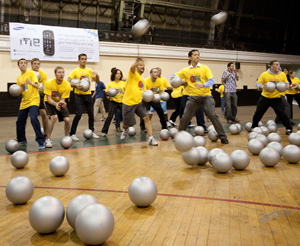 Samsung Dodgeball Has Players Buzzing About its Newest Phone

Samsung Mobile on May 12 broke the Guinness World Record for the largest game of dodgeball. The athletic event, held at the 69th Regiment Armory in New York City, engaged 712 players, 262 more than the previous record held by San Diego State University. The game celebrated the recent launch of the Samsung Reality handset, a smartphone with multiple messaging options and easy access to popular social networking sites.

To promote the game and attract players, Samsung from Apr. 19 to May 12 deployed street teams in New York City to find 16- to 24-year-old male and female influencers, encourage them to try the phone and visit the Samsung Mobile Reality Facebook page to discover the secret location of the game. The event was promoted virally through social media channels, flyers and posters. Samsung also used Twitter to communicate to attendees before, during and after the event using the hashtag #dodgethis to generate excitement, gather testimonials and bring full-circle the social media positioning of the phone.

“It was a viral marketing effort to start with and a lot of word of mouth and social media,” Paul Golden, cmo at Samsung Mobile, told Buzz, adding that this was a first for the brand. “We’ve done other live events and concerts before, but never one like this where we used viral as the means of generating awareness about it.”

At the event, players were divided into blue and yellow teams and hurled rubber balls back and forth at each other while the Samsung crew uploaded photos and videos to the Samsung Reality Facebook page. Ten players from the winning blue team were selected by raffle and they, along with the last man standing on the yellow team, received new Samsung Reality phones for their athletic skills and bravery. All participants received scratch cards with the opportunity to win Reality phones and gift cards and commemorative t-shirts from the event. Samsung donated the dodgeballs used in the game to the Boys and Girls Club of Manhattan and Covenant House of New York.

“This was a unique and unusual way to promote a new handset, and that was something that was important to us in telling the story behind this handset,” said Golden. “It’s always nice to set a world record and we generated a lot of inexpensive publicity and word of mouth about this. Ultimately the pay-off will come in sales of the new handset and we are very pleased with the results so far.” Agency: Pinnacle Marketing Group, Vancouver, WA.