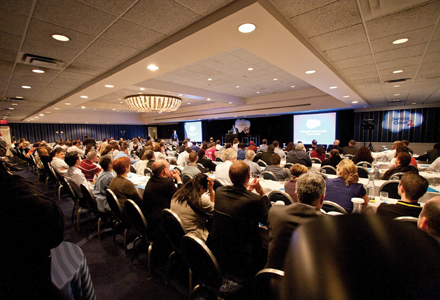 So you just held your company’s biggest event of the year, a global meeting that attracted 20,000 attendees and 250-plus exhibitors and featured 300 informational sessions. How do you keep the momentum going? If you’re Salesforce.com, the answer is a b-to-b road show called the Cloudforce Tour, a rolling series of one-day events that for the past eight years has brought the excitement of its annual user conference, a mega gathering called Dreamforce held each December in San Francisco, to the local level.

“That’s how we get the Dreamforce messages, products, demos and content out to the rest of the world all throughout the year,” says Elizabeth Pinkham, senior vp-strategic events at Salesforce.com. “It all gets unleashed at Dreamforce, then spreads across the globe on the Cloudforce tour.”

Salesforce.com’s road show brings the company’s enterprise cloud computing messages to its customers, prospects, developers, partners, press and analysts. Cloud computing is a technology that allows businesses to subscribe to applications that run in a “cloud” instead of having to buy servers and install hardware and software to manage processes like CRM, HR and accounting. The tour also is a way to update users as new products roll out, such as this year’s Salesforce Chatter, a social collaboration application, so they don’t have to wait for the annual conference.

“It is really our constant face into the community, our chance to come to your city, open up the doors and bring those groups together, to let them talk to each other and learn from each other,” says Pinkham. Taking it one step further, the brand’s army of sales people also takes the content to their customers who couldn’t make it to a Cloudforce event. “It’s all linked,” she adds.

While Dreamforce in December will take over three of San Francisco’s Moscone Center buildings and attract 20,000 attendees, Cloudforce Tour stops, on the other hand, are more intimate affairs. An event in Chicago in March drew 600 people; New York City welcomed 1,600 attendees in April. Salesforce.com works closely with its global teams and shares best practices, so each stop offers a consistent experience for attendees whether they want to hear about cloud computing for beginners or the latest features in Cloud 2, the next generation, for customers (Opus Solutions, Beaverton, OR, handles the tour.)"

The biggest stop this year on the company’s tour took place on June 22 at the San Jose Convention Center where the brand launched the new Chatter networking application. Some of the biggest names in technology participated in the event, from the world’s largest software companies like BMC and CA, which educated the community about Cloud 2, to technology pioneers such as Dell and VMWare. Salesforce.com chairman and ceo Marc Benioff presented a keynote that was audio cast live. Several thousand live event attendees heard the news, listened to keynote presentations, attended breakout sessions and demos, meandered through the exhibit hall and networked with each other. People could log on to salesforce.com/live for a live webcast of the event, follow it on Twitter or become a fan of Chatter on Facebook.

This Cloudforce event was a particularly significant one (anticipation for Chatter had been building for months); however, before it happened, the Cloudforce tour made smaller stops in Singapore (May 25), Melbourne (May 27), Minneapolis (June 2), Sydney (June 3), Bangalore (June 15), Dallas (June 15), Mumbai (June 17) and Long Beach, CA (June 17). Additional stops are in the planning stages.

Pinkham and event lead Michelle Schneider recently shared some of Cloudforce Tour’s best practices. “The strategy of communicating our new cloud computing messages is very important, but just as important are the tactics to execute it flawlessly, and how to replicate that flawless execution in a remote market like Singapore with a team that doesn’t do events of that size as frequently as we do,” Schneider says.

Strong Visuals. Schneider considers carefully exactly what messages attendees see from the moment they cross the threshold of the event hotel. “We always ask venues and hotels to let us put branding as close to the public entrance as possible so no one walks in and wonders where to go,” she says.

Friendly Staff. Everyone associated with the event, even temporary staffers, must reflect the personality of Salesforce.com, a brand Pinkham described as “open, responsive, easy to understand, great to work with and trusted.” During a pre-event walk-through at the hotel, she will replace a staffer who isn’t friendly or smiling. “An attendee doesn’t know that is a hired person. As far as they can tell and should know, everyone working that event is a Salesforce.com person,” she says. “So we try to think about the staff, not just the physical elements.”

Ample Networking. At Cloudforce tour stops customers and prospects mingle, talk and learn from each other. “It became clear from the very beginning that our customers were going to be our strongest voice and best representation of the product,” Pinkham says. “That’s where from the very beginning we based our marketing around and the core of a lot of the messages in this program because it is more relevant and meaningful to prospects.”

Competitive Perspective. Pinkham attends competitors’ events whenever her schedule allows. “We want to see what they are doing, the energy level, the takeaway, the experience, both from a content standpoint and also from a brand experience,” she says. “I don’t think you can do relevant events without knowing what other programs are happening. Your prospects are going to them, so you should, too.”

Benchmarks. Schneider benchmarks across cities where the tour has stopped, keeping tabs on average costs for internet, keynote speakers, food and beverage, production, A/V services, space rental and more. “We have these averages so each quarter when we do our space search we know what is in line and what is not,” she says. That knowledge helps with negotiating rates and estimating what each event is going to cost.

Frequent Testing. Both women are always on the hunt for new ideas, checking out b-to-c events, Apple stores, even a Harley-Davidson rally, then testing them at Cloudforce events. Examples: going from paper invitations to emails, then adding barcodes. A recent M&M’s bar that mapped the candy colors to customer satisfaction scores was another way to save money. EM