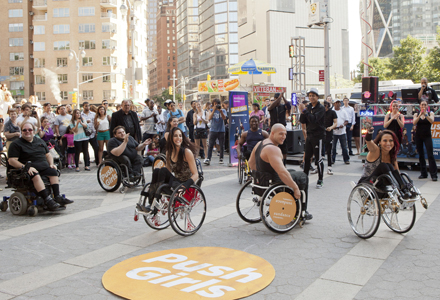 To raise awareness and create buzz, Sundance Channel on May 31 produced three pop-up performances throughout Manhattan to celebrate the launch of Push Girls, a new series that premiered on June 4. Push Girls is a docu-series that features four women who live in Los Angeles who by way of illness or accident are paralyzed from the neck or waist down.

The high-energy performances, which took place in Times Square, the Flatiron District and the Merchant’s Gate entrance to Central Park at Columbus Circle, incorporated a series of acts, beginning with a dj booth and a break dance troupe to warm up the crowd. A performance by American DanceWheels, a wheelchair dance team of 10 wheel chair dancers and seven able-bodied partners, followed with salsa dancing and hiphop moves. Auti Angel and Mia Schaikewitz, two of the show’s stars, performed a duet before all the groups joined together for the grand finale. Angel’s husband, dj Stretch Boogie, manned the dj booth. Eleven-foot truss towers equipped with intelligent and LED lighting, as well as signage and branding elements completed the scene.

“Part of the reason why we have Push Girls on our channel is we feel it is an opportunity to tell a story a story that hasn’t been told and to shatter expectations about what life in a wheel chair is all about,” Monica Bloom, svp of marketing at Sundance Channel, told Buzz. “These stunts were a physical manifestation of that positioning. The whole idea was to surprise passersby who are accustomed to seeing dancers and performances out on the street in New York City, and do it in a way that captured their imagination and attention.” Agency: Michael Alan Group, New York City.