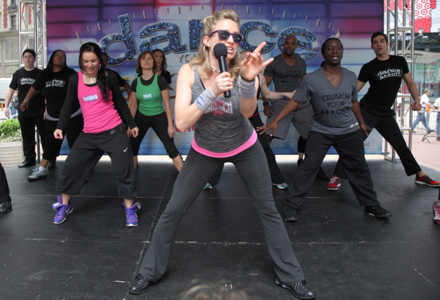 Oxygen Media on July 10 wrapped up its second Dance Your Ass Off tour in Orlando, FL, a five-city marketing program to promote the second season of the network’s signature “Dance Your Ass Off” dance competition series. This year’s tour included a new charity component in which attendees pledged on the tour and online at oxygen.com to dance off a total of a million calories to benefit local chapters of the American Heart Association. The network also made donations to AHA chapters at each of the five stops. The tour also this year featured new sponsor Yoplait in signage and in a 30-second spot in a video loop that played on site.

The tour kicked off on June 14 in New York City’s Times Square where DYAO host Mel B made a special appearance along with performances throughout the day by The Knicks City Dancers, the Crunch Fitness Dancers and other dance teams. Mel B also introduced a 9 p.m. sneak preview of the second episode for fans, answered viewer questions and dished on the behind-the-scenes action on OxygenLive.com on the East Coast at 10 p.m., while executive producer and judge Lisa Ann Walter hosted the chat live on the West Coast.

Attendees also could consult with on-site health experts and received free DYAO ‘flip books’ of themselves performing their favorite dance moves. Other giveaways included workout bags, water bottles, headbands, magnets and bumper stickers as well as the Oxygen DYAO fitness DVD co-produced with Crunch. A ‘before and after’ display of one last year’s contestants’ pants and a 40-pound weight vest that attendees could try on to feel the toll that extra weight adds to the body rounded out the experience.

“We love to find ways to extend our brand and experiential is a big opportunity for that, and we just thought that the idea of the show is so fun and it’s just in the zeitgeist,” Jane Olson, svp marketing and brand strategy at Oxygen, told Buzz. “People really are interested in ways to get healthy and ways to live healthier lifestyles in general in popular culture. We thought this lent itself to an experiential tour like this so well. It was an obvious choice for us.” Agency: Leaddog Marketing, New York City.