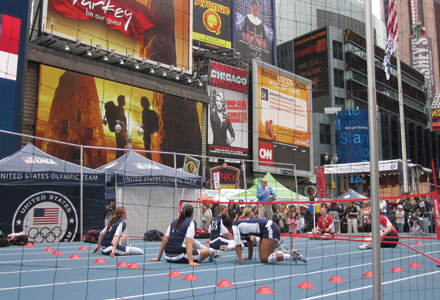 Olympic fever is sweeping the country and the world as the run up to London heats up. New York City’s Times Square earlier this year became a mini Olympic village teeming with athletes, fans, sports demonstrations, autograph sessions, giveaways and sponsor activations as part of the U.S. Olympic Committee’s Road to London celebration.

A red Road to London double-decker bus bearing the Olympic logo helped set the mood during the day-long event, which marked the 100-day countdown to the Opening Ceremony of the London 2012 Summer Olympic Games. It was the third stop on a five-city tour that launched in January in Houston, then moved to Salt Lake City and San Jose, CA before it wraps in Chicago on July 13. The Games begin two weeks later, on July 27, in London (Agencies: Team Epic, Smyrna, GA; Michael Alan Group, New York City).

The celebration began with the launch of “Raise Our Flag,” a fund-raising campaign in which Olympic supporters purchased stitches in the American flag that will accompany the U.S. Olympic Team to the games this summer. Each stitch, which costs $12, will receive a number and be honored on a donor wall at TeamUSA.org where it can be dedicated to a friend, family member or Team USA athlete and shared via Facebook and Twitter. Gold medalists Greg Louganis, Carl Lewis and Allyson Felix dedicated the first stitch to all U.S. Olympians and Paralympians during the ceremony.

From there, it was all fun and games as fans engaged in the action. More than 30 sports were represented and 90 athletes showed up throughout the day. The sponsors, not to be outdone, did their part to raise awareness of the games and inspire pride in the team. Chobani passed out full-sized samples of its Greek yogurt. Here’s a look at some of the other medal-worthy efforts.

There are several hotels surrounding Times Square, but none brought the Olympics to life like Hilton HHonors, presenting sponsor of the Road to London tour. Its 18-foot by 26-foot space resembled a hotel lobby with several areas to engage attendees. In one spot, they could swipe a room key to win prizes representative of all 10 brands within the Hilton Worldwide portfolio. At a replica Olympic podium, they could have a commemorative photo taken wearing official Nike gear with props such as a bouquet of flowers, gold medals and the American flag. Fans could also sign and send notes to Team USA at a large, white Dream Wall, which this summer visited the US Olympic training center in Colorado Springs. They also could enter to win a sweepstakes that will award a grand prize trip for four to London and two first prize trips for two, this summer. Paralympic athlete Alana Nichols was on hand for media and sports demos.

“Hilton HHonors is proud to sponsor Team USA and the Road to London Celebration, which brought the passion of the Games and the athletes to life, connecting fans to the Olympic and Paralympic Games,” says Scott Brennan, vice president, strategic partnerships, Hilton Worldwide. “HHonors brought hotel hospitality to life in Times Square by highlighting our ‘Come Dream With Us’ Olympic platform and provided fans an exciting opportunity to be inspired by the Olympic Spirit.” Agency: The Marketing Arm, Dallas.

TD Ameritrade’s interactive booth reflected the brand’s summer Olympic campaign tagline, “It’s Amazing How Far You Can Go with a Little Help Along the Way,” which ties to the support system that helps athletes achieve their Olympic dreams, as well as with TD Ameritrade’s business resources for individual investors pursing financial goals.

TD Ameritrade’s five sponsored athletes—David Boudia (diving) Natalie Coughlin (swimming), Jonathan Horton (gymnastics), David Oliver (hurdling) and Mariel Zagunis (fencing)—were key to almost every touch point in the experience.  Attendees could don headphones at a five-sided kiosk to watch exclusive video statements from the athletes saying what the tagline means to them. They could also record video messages to send to a helpful person in their own life or have their photo taken to share with friends in a photo op that overlaid their photo next to one of the athletes. The video message and photo op served as lead generation tactics, which the company followed up on with special offers. Attendees also could tweet good luck messages using the TD Ameritrade hashtag. Some of the messages appeared on a gigantic LED Times Square billboard featuring the images of the athletes.
“This is a fun way to show our connection with our athletes and the OSOC sponsorship,” says Dedra Delilli, director corporate sponsorships and client communications at TD Ameritrade. Agency: Intersport, Chicago.

Samsung, the official wireless telecommunications equipment partner of the USOC, demoed its U.S. Olympic Genome Project, a Facebook app in which users can discover their connections to Olympic and Paralympic athletes. Visitors could sign up for the app on Samsung laptaps or the Samsung Galaxy Tab and Galaxy Note devices. Samsung first unveiled the app last March in beta form at SXSWi in Austin, TX.

Through the app, fans can discover their connections to the athletes and the Olympic movement by logging onto Samsung.com/HowOlympicAreYou and using their Facebook profile to connect to the Genome Project. Once they “like” the project, they can share connections with their Facebook friends, take quizzes to raise their member status, learn about athletes and follow Team USA news. Users can redeem tokens that they earn by participating within the app for a trip to the 2012 games in London.
“People want to know how they are connected to the Olympic movement, but don’t necessarily know how,” says Ralph Santana, svp and cmo at Samsung N.A., who was on hand at the Times Square event. “This Facebook experience literally maps out like a family tree how people are connected. It also gives people more of a connection and a little more endearment toward the brand.” Agency: Team Epic, Smyrna, GA.

AT&T, a 20-year Olympic sponsor, will provide networking services to NBC for its cross-networks Olympics telecasts this summer, so naturally its activation was pretty high-tech. Attendees interacted with an augmented reality trivia game on a wireless device that challenged users to answer progressively harder questions about USA Gymnastics. And a caricature artist drew attendees’ likenesses on a wireless Samsung Note, rather than the old-fashioned way, with charcoal or pastels, then digitally sent the picture. AT&T handed out co-branded patches and cards with info on where to text for the latest on Team USA and a QR code to scan for exclusive Team USA content.
“It was about our brand and promoting our support of Team USA,” says Bill Moseley, director of corporate sponsorships at AT&T. “100 Days Out is a great time to launch awareness of our support of the USOC and Team USA.” Agency: The Marketing Arm, Dallas.

BP, the official oil and gas partner for London 2012, debuted its 100 Days Out video featuring BP’s athlete ambassadors on its BP Team USA Facebook page and YouTube. Meanwhile, on-site in Times Square Paralympic sprinter Jerome Singleton, Jr. appeared in the booth, which BP leveraged via social media on Twitter and with live updates on Facebook, which showed a photo of him signing autographs for fans. Fans could learn more about BP’s sponsored athletes at an augmented reality station and could have a commemorative photo taken against an Olympic backdrop. Agency: GMR Marketing, New Berlin, WI.

As exclusive licensed trading card provider of the US Olympic Team and to engage fans and introduce them to the product, Topps distributed 20,000 of its colorful, fact-filled cards. To add to the fun, it had large-size reproductions of the Michael Phelps and Sean Johnson cards with the heads cut out so fans could take their picture. Fans could tweet their photo to @toppscards for a chance to win a complete set of Olympic cards or some with autographs.
“Topps has been around for more than 60 years,” says Joe Ribando, director, player licensing at Topps. “What better way to capture that American spirit than with the Olympics?”

The Connecticut-based insurance company sponsored two one-hour “sit” volleyball demos with eight members of the women’s national sit volleyball team participating against able-bodied volunteers. “We are giving able-bodied people the opportunity to see what it’s like to be disabled, or we find they don’t know how to react to someone in a wheelchair,” says John Carideo, assistant director of sponsorships at The Hartford. “We hope our demonstrations today will help that, but our real job for this celebration is to bring more awareness about the Paralympics.”
The company also handed out articles about its Paralympic sponsorship and its ability philosophy. Larry the Stag, its mascot, was on hand for photos, which people could tweet or post to Facebook, along with messages about what they learned at the event. Agency: Sportsmark, San Francisco.