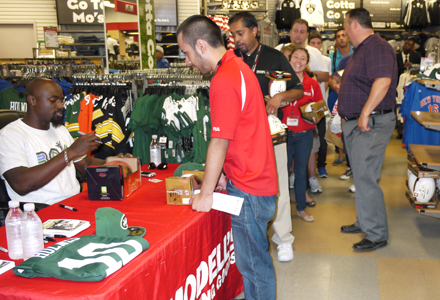 The NFL last week got New York City retailers and fans to show their team spirit with a Back to Football shopping event held along 34th Street’s retail row. Storefronts showcased NFL apparel and other products and consumers, who were encouraged to wear NFL-licensed gear, participated in activities including the New Era Scavenger Hunt, player meet and greets and more. The fan events took place on Tuesday, Sept. 4. The shop window displays continued through the weekend.

The activities began in Manhattan Mall where fans could snap their picture with the Vince Lombardi trophy on display. New Era football cap technicians were on hand to fit consumers for a fitted cap. The Verizon Wireless store conducted NFL mobile demos on its phones. Kmart offered a sweepstakes in which fans could win a 32-inch flat screen TV and the new EA Madden NFL 13 game. Multiple retailers supported the New Era Back to Football Scavenger Hunt in which fans could win trading cards, team apparel, New Era Snap Back hats and other prizes.

“The goal was to elevate the NFL brand at retail, and the retailers really stepped up with displays that told a collective story,” Natara Holloway, vp-retail development at NFL, told Buzz. “It was an opportunity for us to engage with fans at retail.”