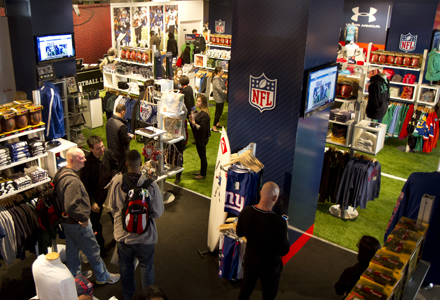 On April 2, the NFL opened its first-ever pop-up in New York City in celebration of its newest partnerships with Nike and New Era. The 10,000-square-foot NFL Shop at Draft located at 1095 Avenue of the Americas at 41st and 42nd Streets, not only houses merchandise by its new partners but also from 50 other NFL partners, including Under Armour, VF, Wilson and ’47 Brand. The theme, experiences and merchandise will be rotating each week throughout the month, and include a mock football field with a 50-yard line down the center on the 42nd Street side and a wall collage of NFL Draft images with a mock draft stage in the center. The pop-up will also showcase all 32 NFL teams’ New Era draft caps and 32 new Nike jerseys.

“We’re celebrating our new partners and also showcasing all of our other partners to show how deep the assortment is and our product offerings,” Rhiannon Madden, director-apparel at NFL, told Buzz. “We have something for all of our fans. We want to make sure that we’re speaking to each of them in an individual voice.” Fans can get their hands on limited-time-only products exclusive to the pop-up, such as NFL Draft kukui nut necklaces by Style Pasifika, rhinestone NFL tees from Cuce Apparel and 2012 NFL Draft tees. And from April 4 to 14, the Vince Lombardi Trophy will be on display as well as the championship rings from Super Bowl games I-XLV (April 8-24). Beginning April 19, fans can also purchase commemorative Wilson balls that they can customize on-site. They can also follow the pop-up shop on Twitter @officialnflshop to get updates about player and celebrity appearances, as well as new merchandise. Agencies: MKTG INC, New York City; p.r. by Grey Alliance, New York City.