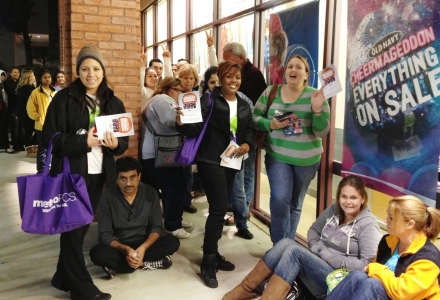 MetroPCS, the no annual contract wireless provider, on Black Friday went where its customers could be found on the day after Thanksgiving—on the lines outside of malls waiting for stores to open. The effort reached an estimated 5,000 to 6,000 people and helped boost Black Friday sales of the Galaxy S3 handset, a recent addition to the MetroPCS line-up, by 250 percent compared to sales prior to Black Friday.

The company sent 12 teams of two to three brand ambassadors to select Atlanta area malls to promote its Black Friday phone sale and get the Galaxy S3 into peoples’ hands. The Survival Teams showed up in a branded vehicle featuring the new handset image. As they worked the line, they demoed the phone so consumers could experience the speed of its 4G LTE network and discussed rate plans and coverage areas. They handed out holiday cheat sheets with space for a shopping list and the best Android apps for the holiday season, including coupons, recipe finders, GPS and shopping guides. They also distributed free survival kits containing Coke or Diet Coke and granola bars.

“Buying a phone is like buying produce—you want to touch and feel it,” Mike Loverde, regional director of advertising and p.r. at MetroPCS, told Buzz. “We reached the deal seekers while they were seeking deals.” Agency: Next Marketing, Atlanta.