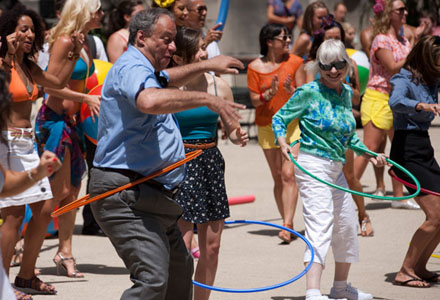 To promote its new smoothie flavor, the McCafé Mango Pineapple Real Fruit Smoothie, McDonald’s on July 14 staged a flash mob-esque beach party in Chicago’s Riverside Park during lunch. It all began with a bikini. An attractive young woman strolled through the park in a bikini as the business people of Chicago gathered in the park for lunch. She set up a beach chair right in the center of the park and asked a passing male “consumer” to help put some sunscreen on her back. He agreed, and suddenly Caribbean steel drum music started playing and dancers streamed into the plaza in beach wear and carrying towels, surfboards, hula-hoops and pool noodles.

The group performed a choreographed dance for the crowd (check out a consumer’s video here) and brand ambassadors began circulating handing out samples of the new smoothie. The crowd got in on the action with hula contests, a limbo competition and plenty of dancing. The event lasted 90 minutes and McDonald’s handed out about 1,400 samples and generated about 4,500 views for the official video.

“Our main goal was to treat workers in a downtown business district to a fun surprise in the middle of their workday and have them try the McCafé Mango Pineapple Real Fruit Smoothie,” Ashlee Yingling, spokeswoman for McDonald’s USA, told Buzz. “Our hope was that trying the new smoothie would entice them to go out and get one for themselves.” Agency: agencyEA, Chicago.
2 ARTICLES LEFT!
Subscribe Today and Get Unlimited Use of the World’s Largest Content Resource on Experiential Marketing