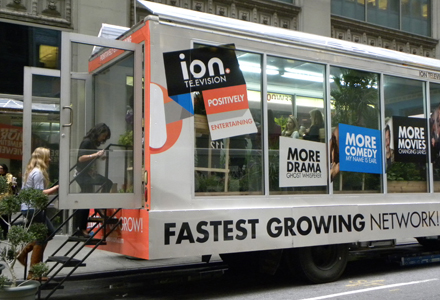 ION Reinforces its Growing Ratings with a Greenhouse on Wheels Tour

From Oct. 19 to 21, ION Television reinforced its position as the fastest growing network on television by visiting its top eight New York City advertising agencies in a Greenhouse on Wheels. The mobile vehicle was part of the network’s ongoing Positively Entertaining campaign, which kicked off in 2008 when it re-launched the ION brand as ION Television.

“We refreshed our graphics package and re-launched it on Oct. 4 with a business-to- business marketing campaign to reach not only our advertisers, but our distributors as well,” Chris Addeo, vp-marketing at ION Television, told Buzz. “But we also wanted to have additional extensions to support our whole Positively Entertaining positioning, as well as the fact that we have been the fastest growing network, and so we did our Greenhouse on Wheels.”

ION sent out an email blast to the agencies announcing its locations and scheduled stops throughout each day. It provided a two-hour window to each agency to come down and check out the truck filled with plants and foliage as well as the brand’s messaging. Visitors could enter to win an iPad each day by guessing how many pumpkin seeds were in a clear container; whoever got closest took home the iPad. Visitors also walked away with a bamboo plant. To cast a wider net, ION sent bamboo plants to the rest of its clients across the country.

The Greenhouse on Wheels, which roamed the city as a moving billboard the four days of the campaign, also served as a way to connect with consumers. On Oct. 20, the branded vehicle supported a press stunt ION TV did in the Flatiron Pedestrian Plaza in partnership with WPLJ radio, which pre-selected four contestants to race to the top of a rock-climbing wall to win a getaway vacation. ION extended the experience to area school kids, who took on the challenge of climbing the wall to receive $500 towards his or her school’s physical education program. ION donated $10,000 in total to local schools.

“We were able to further our message as the fastest growing network by erecting a wall that looked like a tree to help grow area schools,” added Addeo.